A Way With The Fairies

A MIDSUMMER NIGHT’S DREAM: A Play For The Nation

As part of the commemorations of Shakespeare’s 400th death-iversary, The RSC has undertaken the unenviable and colossal task of staging a production of his popular comedy and touring it around the country – but that’s only the half of it.  At each stop, the so-called ‘rude mechanicals’ are being played by hand-picked troupes of amateur performers.  A big chance for them and a big gamble for the RSC.  Add to this, dozens of children from local primary schools… Luckily, no one handles child performers like the RSC – you only have to think of Matilda to know this is going to work brilliantly.

If this afternoon’s performance is anything to go by, the gamble has paid off in spades.  It is an absolute pleasure to see ‘The Nonentities’ from Kidderminster taking the stage among world class professionals, and holding their own.  But I’ll come back to them in a bit…

Among the pros – a delightful ensemble that, under Erica Whyman’s direction, make familiar lines sound fresh and funny – we get a female Puck (Lucy Ellinson) a kind of cross-dressing music hall figure, like Vesta Tilley.  Ellinson is both knowing and clownish in this setting: we’re in a disused theatre, it looks like, during wartime.  Tom Piper’s design gives us bare floorboards and footlights.  The forest has not a speck of green but rather the red of the Curtain.  Chu Omambala’s Oberon, the fairy king, is stylish in his white suit, bringing a jazzy element to proceedings, in contrast with Ayesha Dharker’s exotic Titania, in blood red sari.  Omambala and Dharker are deadly serious – these are not fairies of whimsy, however petty their squabble may seem.

The other ruling couple, Theseus (Sam Redford) and Hippolyta (Laura Harding) stride around like genial aristocracy.  It is the younger members of the cast that bring life to the scenes in Athens.  Mercy Ojelade is a fiery Hermia, her passion born of pain and injustice, while Laura Riseborough’s Helena also expresses the pain of unrequited love in a highly sympathetic characterisation.  Chris Nayak’s Demetrius is a pompous prig, so it’s enjoyable to see him go to the other extreme in the name of love, but it’s Jack Holden’s delightful school prefect of a Lysander that gets the most laughs and touches the heart.  It is the freshest interpretation of this character I have seen.  Scenes in which the young men vie for Helena, to Hermia’s dismay and fury, are superbly done, using physicality as well as Shakespeare’s barrage of insults to great comic effect.

But back to those mechanicals.  Chris Clarke is spot on as overbearing bully Bottom – and you can’t help liking his ridiculous declamations.  Sue Downing’s Peter Quince is assertive enough to stage-manage Bottom’s ego, and Andrew Bingham’s shy Snug makes for an adorably shy and cowardly lion.  Of course, the West Midlands accent gives them a head start when it comes to comic value, but here it is the playing that gets the laughs and endears them to us.  Alex Powell’s Flute blossoms as a performer so we he comes to give his Thisbe (or Thiz-bay, as they would have it) we see how far he has come.  The performance that is the culmination of their efforts is absolutely joyous.  It is surely Shakespeare’s funniest scene and here it is expertly executed.  The affection we feel for the mechanicals succeeding in their task is echoed by the admiration we have for this company who rise to the challenge, hold their own, and pull it off with aplomb. 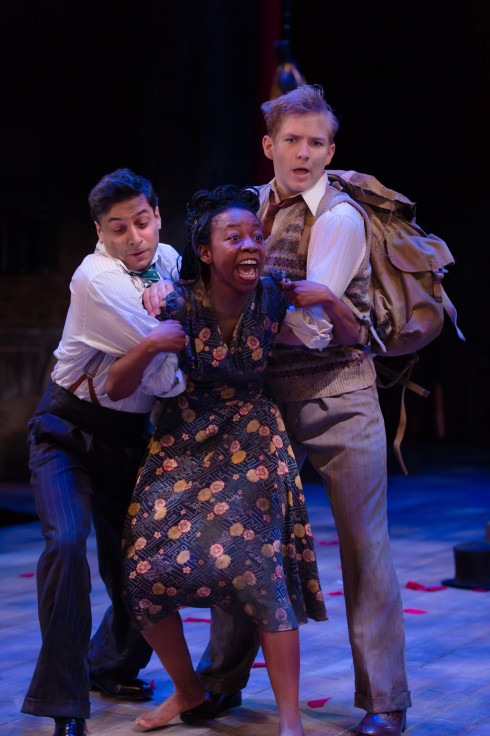