Norwegian band a-ha first made an impact three decades ago with their debut single Take On Me – lead singer Morten Harket’s devastating good looks and a romantic, animated adventure combined in a video that was striking and innovative in its day.  One might expect this show to be equally visually striking – and it certainly is.  The stage is flanked by four large screens, used to show close-ups of the band members, while the huge backdrop displays projections, a ceaseless cavalcade of images, some literal, some abstract, to accompany the songs.  Chuck in some searchlights and blasts of coloured light and there is certainly plenty to look at – This is only of secondary importance, however, to the sound.

They sound great.  Phenomenally great.  Opening number (and one of my favourites) I’ve Been Losing You – a tale of Nordic noir murder – sets out the stall.  Other hits soon follow: Cry Wolf (oo-ooh!) and the splendid Stay on These Roads, with its yearning melancholia.  Morten Harket’s icicle voice, beautiful and chilling, is as sweetly searing as it has ever been – and he looks great too, of course.  In fact, every member of the band is aging well. Magne Furuholmen and Paul Waaktaar-Savoy must have been cryogenically frozen in their 30s.  Perhaps there is something in the clean Norwegian air.

New material sits well alongside the old.  Their latest album, Cast In Steel, contains some of their finest work.  Some might argue the best yet, but there is still plenty of room in my heart for earlier stuff, like their superlative cover of Crying in the Rain.

Some of the old stuff gets a bit of a makeover.  Sycamore Leaves is heavier, meatier, here – a proper, stadium-scale production number.  Foot of the Mountain is rather grandiose given this treatment, but then is immediately contrasted with Hunting High and Low, a heartache of a song about lost love.  We join in; I’ve never heard the people of Birmingham in finer voice!

For encores we are treated to The Sun Always Shines on TV, new song Under the Makeup, Bond theme The Living Daylights and of course, the joyous Take On Me.

a-ha perform songs about the darker side of human experience but in such an upbeat, stirring way, you can’t help having a great time. 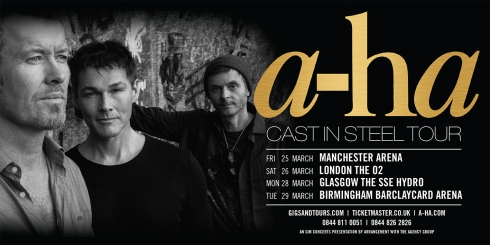