Maria Aberg’s production of one of Shakespeare’s more uneven comedies is a qualified success.  It falls to a strong cast to lift the show out of some rather muddy ideas.   It gets off to a good start.  The opening exchanges between Orlando and old servant Adam, and then between Orlando and his big brother Oliver are very nicely played and staged, but when we move to the court of Duke Frederick, things take a turn for the bizarre.  The courtiers do a dance, a jerky, spasmodic routine that I guess is meant to convey something about the confinements and restrictions placed on them.  It’s a bit weird and distracts from the action of the scene and, what is most odd, we don’t get anything else like this throughout the piece.  The idea is underused and undeveloped.  The production gains nothing by its inclusion.

The wrestling scene is visceral. Malcolm Ranson has created more of a bare-knuckle fight than a wrestling match.  Orlando proves to be enough of a biter to merit a signing as a professional footballer.

This play stands or falls on its Rosalind and Orlando.  Aberg has two of the best I’ve seen.  Pippa Nixon is spot on as the disenfranchised Duke’s daughter, assured enough to be witty and young enough to be swept away by love at first sight.  She turns to cross-dressing as a means of survival, playing the comedy and the dramatic irony to the hilt.  Her role-playing scenes with Orlando are funny and touching, eliciting many an ooh and an aww from the sixth-formers in the balcony.  Nixon has been good in previous productions.  In this one she is excellent.

Alex Waldmann makes his Orlando likeable from the start.  His scenes with faithful old manservant Adam (David Fielder) are wonderful.  Orlando’s affections become preoccupied with Rosalind and Waldmann is adorable in his halting attempts to compose a song for her.  It is good to see him in  more light-hearted scenes, and he plays them with truth and credibility.

Aberg’s Forest of Arden is foliage free and infested with new-age travellers, refugees from a Levellers’ concert.  It all gets a bit too hippy-dippy and Glastonbury festival for my tastes.  Melancholic Jaques (Oliver Ryan) is peculiar, tripping out to an acoustic guitar. The comic business between Touchstone and Audrey, and Silvius and Pheobe, is a little encumbered by the set – a sort of revolving gazebo affair.  The play works best when the scenes are played in such a way that you can overlook the setting, ignore the fridge, and enjoy Shakespeare expertly delivered.

Luke Norris is very good as Oliver and John Stahl makes his mark as the tyrannical Duke – a pity we only hear about his demise rather than seeing him again but, hey ho, that’s Shakespeare.  Michael Grady-Hall gives depth to the minor role of Silvius although his Phoebe (Natalie Klamar) is a little too annoying.  Nicolas Tennant’s Touchstone starts off as Charlie Cairoli from the waist up and Max Wall from the waist down, but ends up as a debauched Godspell reject.  He tries to engage in some improvised patter with an audience member; hilariously it falls flat. “I’m back on the text now,” he points out, “We’ve got a long way to go.”

He’s right.  It is a bit long and could stand a few cuts.  Rosalind’s song, for example, during which a quartet of female characters parade around with flaming torches – the woman beside me leaned towards my ear and declared, “It’s like a sixth form play”.  I think, all in all, I enjoyed the production more than she did, because of the actors and despite the director! 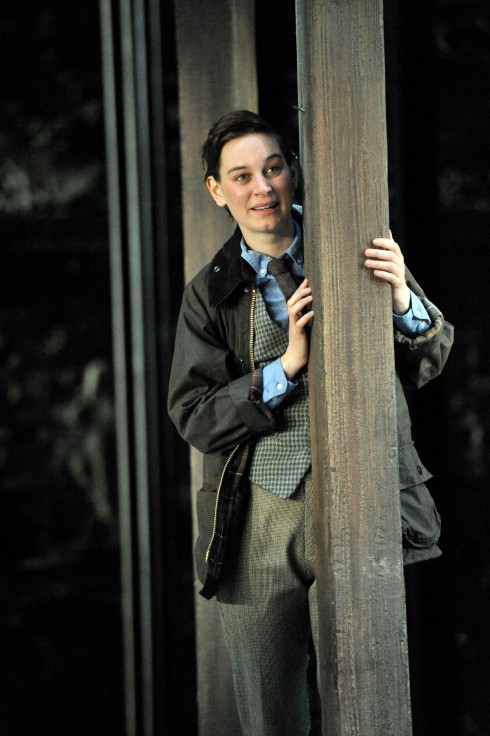 Pippa Nixon as Rosalind as Ganymede

David Farr sets his Elsinore in an old-school school hall.  Wood panelling covers the walls.  Low benches from P.E. lessons and metal-framed stacking chairs.  Upstage, steps lead to a proscenium arch and a platform with some heavy duty chairs and table.  The wooden floor is marked with tramlines and fencing foils hang from the walls.  Fire doors lead off to the exit.  Above the proscenium, rather subtly, is the legend, Mens sans in corpore sano.  There is also a handbell knocking around but it’s the accoutrements of fencing that dominate – the sport rather than the gardening variety.  The masks especially are put to good use (Hamlet’s dad’s ghost wears the full rig-out) and the foils are put to almost constant use.

Hamlet (Jonathan Slinger) appears right at the start, in a black suit, still sobbing over his father’s death and what has followed.  With that suit and his specs, he looks like Philip Larkin.  But rather than a provincial librarian turned poet, Hamlet is a student at Wittenberg University – a mature student, it would appear.  We are in the early 1960s, judging from Jon Bausor’s designs – Ophelia (Pippa Nixon) in skirt, tights and sensible shoes is either a student or teacher, or perhaps a student teacher, shedding an armful of exercise books to throw herself into a passionate embrace with Philip Larkin, sorry, Prince Hamlet.  Horatio sports a jacket with leather patches at his elbows.  Laertes wears a polo neck.  This is the era before hair got really long and clothes became really colourful.

It’s a dingy Denmark, traditional and staid. But as we know, there is something rotten in the state.  The problem with Hamlet, I find, is it’s too familiar.  Almost every line is a famous quote.  It’s like Shakespeare’s Greatest Hits or even the English Language’s Greatest Hits.  So much of the play has entered common usage, it takes an excellent production to make the lines sound fresh and new and current within the context of the production.  This one does that, but patchily.  I suppose if this is your first Hamlet it’s a strong one but a long one to begin with.

Slinger doesn’t look like a Hamlet but he sounds like one and can drive a good soliloquy.  He has an impressive range of sarcastic gestures and mockery, and his energy never flags in a performance of contrasts and colours, mood swings and madness.  At one point he enters singing Ken Dodd’s Happiness but sadly without the tickling stick.  In scenes with his mother (Charlotte Cornwell) his petulant, rather teenage protestations are perhaps the greatest stretch of credibility, but on the whole this melancholy prince gives an impressive turn.  If you disregard the fact that he’s breaking most of the instructions he gives to the Players when they arrive.  Like his half-on and half-off fencing armour, the part doesn’t quite fit him, try as he might.

Nixon is a striking Ophelia, abused by Hamlet: he strips her down to vest and tights as if she’s forgotten her PE kit – and by the director: she has to lie dead in the dirt downstage centre for the final scenes while all around her is action and murder.  Horatio (Alex Waldmann – now there’s a Hamlet I would like to see) is a beatnik intellectual but no less genuine in his affection for his royal friend.  Greg Wise doubles as Claudius and the brother he murdered; his Ghost of Hamlet’s Dad is eerie and moving, while his murderous Claudius keeps a tight rein on himself until he’s alone and at prayer.  It was a special treat for this Rock Follies fan to see Charlotte Cornwell as an elegant Gertrude, looking fabulous in couture but also powerful as the woman who has unwittingly participated in her own and everyone else’s downfall.

I adored Robin Soans’s prissy and self-important Polonius and was sorry to see him stabbed behind the arras (ouch!) and as his son, Laertes, Luke Norris cuts a dashing figure.  His final confrontation with Hamlet doesn’t look like a fair fight, and indeed, it isn’t.

It’s well worth seeing but it’s more of a “Let’s see how they do this bit” kind of show rather than an engaging presentation of tragedy.  I didn’t get beyond regarding the actors as actors, or appreciating the technical aspects of the production, rather than being moved by the characters.

Larkin about (Photo by Keith Pattison)