Out of the Question

Birmingham’s Repertory Theatre is hosting the UK premiere of this Irish production, based on a novel by Louise O’Neill.  At first, Meadhbh McHugh’s adaptation plays like Derry Girls meets Skins, with the school uniforms of the characters emphasising their youth and immaturity.  Like most young people, they’re looking forward to a party where drink and drugs and members of the opposite sex will be freely available.  They’re not an especially appealing bunch, with the lads bringing obnoxious to new levels – is their conduct exaggerated to make a point?  Probably, but not by much, I’d wager.

Emma (Lauren Coe) is our protagonist.  Having previously counselled a friend who was assaulted to say nothing, she finds herself in the same boat when the party takes a dark turn.  An ill-advised sexual encounter degenerates into a gang-rape and photos of the event are plastered all over social media.  Somehow, Emma is to blame.  For the event, for pressing charges, for causing upset to the boys’ poor mothers… Emma becomes increasingly isolated and withdrawn, her entire life a nightmare.

Lauren Coe is superb as the victim, bringing depth to her silences and pain to the voiceovers that work as asides.  As her parents, Dawn Bradfield and Simon O’Gorman give powerful performances, demonstrating clearly the attitudes Emma is up against.  It takes brother Bryan (Liam Heslin) a more-enlightened soul having been away to college, to stand up for his sister and lay the blame where it belongs, squarely at the boys’ feet.  Bryan is fighting a losing battle.

Paul O’Mahony’s changeable set design serves as a range of locations.  Under Sinead McKenna’s lighting and accompanied by Philip Stewart’s sound design, the staging is a nightmarish setting, an assault on our senses.  Loud, discordant music and loud, unsettling sounds contribute to the visceral experience, putting us in Emma’s mindspace.  For the second half, the set closes in, claustrophobically, for a more conventional kitchen-sink scene as the family lash out and thrash out, forcing Emma to make a decision.

Director Annabelle Comyn keeps us gripped throughout the play’s bum-numbing running time, eliciting powerful performances from her young ensemble, and enhancing the experience with stage technology.  Jack Phelan’s video raindrops fall like tears.  A tight spotlight pinpoints Emma and isolates her in darkness.  There is a lot of dark beauty to this production.

Rather than focussing on rape culture, I find the story is more about blame culture – victim-blaming and shaming, that is.  The real culprits are plain for all to see, and we see how they are dealt with.  The play is a clarion call to change all of this.

It’s a stark production that is to be experienced and admired rather than enjoyed.  Never less than engaging, it gets its message across and provokes discussion all the way home. 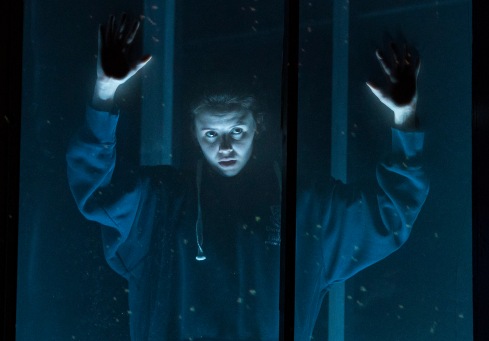