Frances Hodgson Burnett’s celebrated children’s novel first appeared in 1911.  It wasn’t quite that long ago when I read it but various film and stage adaptations of it have kept the story and characters in my mind over the years.  Now comes this new version by Simon Ravenhill and it’s a corker.  With only a cast of four, Ravenhill delivers the whole book and while the action moves swiftly, it never feels rushed.  The pacing is spot on, allowing key moments to develop and play out while keeping the plot ticking along.

Nicolette Morgan is our heroine, the orphan Mary Lennox, returning from India to an England she has never known.  Accustomed to being dressed by her Ayah, Mary is a fish out of kedgeree and, pretty much left to her own devices, continues to feel unloved and unwanted by all and sundry.  Until she begins to make friends, that is.  Morgan is excellent, giving us young Mary’s wilfulness and vulnerability without playing down to the character’s age.

She is supported by three versatile character actors who populate the rest of the story with quick changes and varied characterisations – it’s easy to forget there’s only four of them in it, and such is the transformative nature of the costumes and the actors’ skills, it’s hard to believe that the fearsome housekeeper Mrs Medlock is played by the same actor (Dru Stephenson) as the likeable, green-fingered, Doctor Doolittle-ish young boy, Dickon.  Lorenna White bobs and chatters as chambermaid Martha, and really comes into her own as the tantrum-throwing invalid Colin.  James Nicholas brings stature to the piece in a range of authoritarian roles: the Doctor,  the hunchbacked Mr Craven, a colonel.   This is a top-drawer quartet in a high-quality piece.

Simon Ravenhill also directs, getting his cast to work hard to keep things going, and there are plenty of pleasing touches, simple but so effective: a four-poster bed dominates the set, and a free-standing but movable door helps give the sense of the rambling country manor house to which Mary is consigned.   Puppets are used sparingly for that extra touch of animal magic.  The detailed costumes and the odd piece of furniture convey the period setting but it’s the actors that drive the piece.  Ravenhill’s script uses Burnett’s words but allows the characters to interact rather than resorting to narration.  I will admit to having something of a Pavlovian response to the Indian music used to underscore the scene changes.  By the interval, I was craving a vegetable madras.

A faithful and classy production of a classic story with a child-friendly running time, this is a captivating and well-tended Secret Garden that touches the heart and is yet another example of the excellent work produced at the Blue Orange.  The book’s message remains: what is left neglected will wither and spoil.  And that works for people as much as plants. 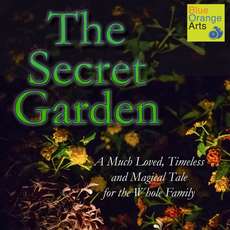