Continuing the fad of adapting films into musicals comes this staging of John Carney’s 2007 film, which at least had original songs.  These have been developed into a full score (by Glen Hansard and Marketa Irglova) and although the action takes place in Dublin it’s not all diddly diddly dee – although there is some of that to give local flavour.  Enda Walsh’s book is brimming with wit, warmth and charm.

An Irish pub forms the backdrop, the kind of place where everyone can sing and play a musical instrument; the ensemble remain onstage throughout, observing like a silent chorus, reacting with subtle choreography, and contributing physical theatre where necessary, as well as shifting furniture and pianos and so on to keep the story flowing.

The story is a little slight: girl meets boy, helps him reconnect with his musical ambitions, setting him up for a life-changing trip to New York City…

The boy, or ‘Guy’ as he is referred to in the programme, is a vacuum cleaner repairman, disillusioned with busking and his musical aspirations.  He is about to walk away from his guitar for good when up steps the ‘Girl’, a kooky Czech lass who imposes herself on him with unrelenting directness, in a resistance-is-futile kind of way.  The result is a sweet and gentle love story, infused with a vibrant, rich score of pop songs and ballads, informed by Irish and Czech traditions.  It is lovely stuff.

As the ‘Guy’ Daniel Healy is the least kooky of the lot, and it’s a treat to hear him sing and play.  His numbers smack of Damien Rice – and this is a good thing, as Healy’s voice builds in power and expression and the ensemble joins in.  Searing and emotive, the songs get you right in the feels.

The ‘Girl’ is winningly portrayed by Emma Lucia, getting lots of laughs from her character rather than from a comedy Czech accent.  She sings very sweetly and when she duets with Healy, it confirms our suspicions that the two are made for each other.

Among the ensemble there are notable turns from the likes of Dan Bottomley as music shop proprietor Billy, Samuel Martin as a bank manager who can’t sing (a hilarious number!), and Susannah van den Berg as the formidable Baruska, the Girl’s mother.  Lloyd Gorman makes a strong impression as Svec, ripping his trousers off to play the drums and learning English from a tawdry soap opera.  In this performance, the sultry role of Reza is played by Hanna Khogali, bringing an exotic touch to proceedings – the show demonstrates how music unites us, wherever we’re from.  It is part of what makes us human and something to which we can all relate.

A toe-tapping, hand-clapping, heart-warming production that celebrates differences between cultures while reinforcing the similarities between us all. 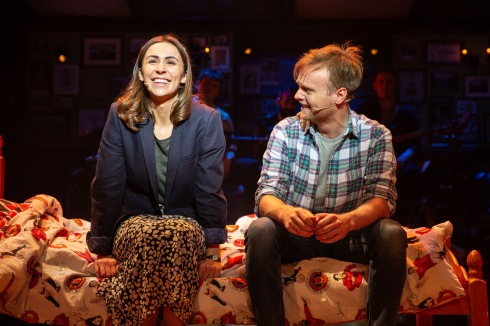