Based on a schlocky horror film, this satirical musical by Joe Dipietro is given a stripped- down presentation in the Old Joint Stock’s intimate space.  I say ‘intimate’ and I mean ‘in your face’.  We are right there, inches away from the performers, within their grasp, within their eye-line, in their path…

It’s the story of hapless nerd Melvin Ferd the Third who, having been dumped in a barrel of toxic waste, develops superhuman strength along with other, less desirable attributes, like green skin and leaking pustules.  In love with blind librarian Sarah, ‘Toxie’ becomes a force for good, fighting against pollution and corporate negligence, largely in the glamorous if tacky figure of the Mayor of New Jersey, Babs Belgoody.

In the title role, Richard Haines is remarkable, giving a flawlessly sung performance as good as any I’ve heard in the West End.  His rendition of You Tore My Heart Out is stunning.  His acting is top notch too, and he is supported by half a dozen strong co-stars, not least Sarah Haines as his love interest, a blind librarian.  The show gets a lot of mileage out of Sarah’s disability; we know we shouldn’t laugh, but we do, but this is cartoon stuff.  Everything is heightened for comedic melodrama – even the scene changes are hilarious.

Lizzie Robins doubles as the wicked Mayor Babs and Melvin’s Noo Yoik mother, Ma Ferd.  At one point the story calls for both of her characters to sing a duet.  Robins pulls it off with aplomb, keeping each character in a different register.  She almost doesn’t need the half-and-half costume she dons to close the number.

A versatile quartet makes up the rest of the cast, listed simply as Black Dude, White Dude, Black Chick, and White Chick.  They provide all the supporting roles and they each get plenty of opportunity to shine.  Alanna Boden’s Professor, for example, in a duet with the Mayor is a delight; Elle Knowles’s bully, Gavin Whichello’s shirtless cowboy singer – the quartet are the beating heart of the show, the population of the troubled town of Tromaville.  They’re all great but I feel I ought to make special mention of Joash Musundi for his doughnut-eating cop, his doctor, and his wonderful Shoniqua.

This is a production that revels in its limitations.  Director Adam Carver works wonders to keep things hilarious, aided by Sarah Haines’s frenetic choreography.  Every moment I’m torn between laughing out loud and marvelling at the talent on display.  Hugely enjoyable, exhilaratingly delivered, this rude and raunchy show is more tonic than toxic.

What is toxic is the world we live in.  If corporations and politicians aren’t going to address issues of climate change, perhaps we ought to adopt the Toxic Avenger’s approach and start ripping off a few heads! 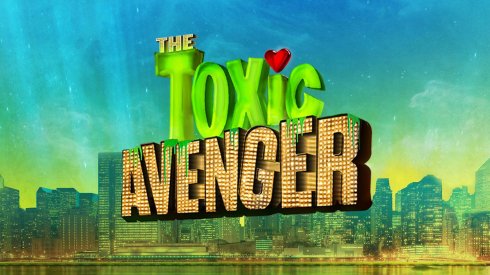 The world is in the toilet.  Corporations profit from basic human functions and the law is on their side.  The premise for this  2001 musical by Mark Hollman and Greg Kotis is at once ridiculous and pertinent – never more so than in this crazy day and age.  Politicians in the pockets of unscrupulous corporations – surely not!

In this piss-topia arises a hero and rabble-rouser Bobby Strong who encourages the poor to pee for free, inspired by his love for the naive daughter of the boss of the evil corporation.  Events unfold in a surprising way: our way of life is unsustainable, the show reminds us, and perhaps a socialist revolution is not an easy fix.

It’s a brilliant, hilarious show – one of my all-time favourites – and the funniest serious musical you could ever hope to enjoy.

As Bobby Strong,  Brad Walwyn is in superb voice.  In fact they all are, as soloists and in the hair-raising chorus numbers.  The Old Joint Stock Musical Theatre Company is a wealth of talent crammed into a tiny studio – the intimacy of the venue adds to the energy and immediacy of the show.  There is no attempt at maintaining a fourth wall here, no point when the show, with its Brechtian devices, celebrates the artifice and theatricality of the enterprise.  Chief of these frame-breakers, is Officer Lockstock, our narrator, played to the hilt by the charismatic Richard Haines who delivers a kind of easy menace and a knowing humour.  Karl Steele is excellent as villain of the piece, Caldwell B Cladwell while daughter Hope (Mairead Mallon) is a wide-eyed, eyelid-batting delight. Lizzie Robins hits the high notes as Miss Pennywise, and Laura Peters is a hoot as the ever-questioning innocent, Little Sally.  But really, ever chorus member deserves the highest praise.  Kudos, too,  to the unseen live band that delivers the rich and complex score.

The choreography, by Sarah Haines, is infectious – you feel like getting up and joining in.  Director Adam Carver (who also appears as slimy Senator Fipp) keeps things in-your-face and adorns the action with hilarious comic business.  There is a lot going on in this tiny space, and the audience is caught in the middle of it – which suits the show’s message absolutely.  Not that this is a preachy production.  It’s an engaging, exhilarating entertainment that tickles the mind as much as the funnybone.  And this version at the Old Joint Stock is practically flawless.  A contender for my Show Of The Year, this is everything theatre should be. 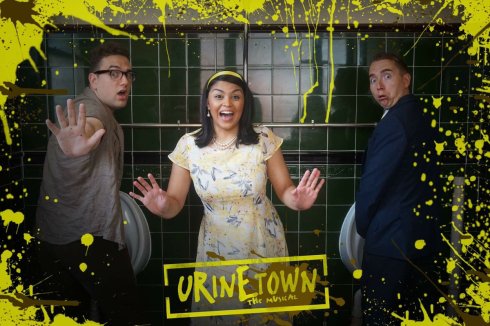