There must be an unwritten law that every am-dram group, every school, must stage a production of Lionel Bart’s evergreen musical at some point.  Now, it’s the turn of the Crescent and it’s an excellent fit.  What is perhaps the best musical Britain has ever produced continues to draw in the crowds and to satisfy the audiences.  In fact, it has probably superseded the Dickens original in the public consciousness.  We come to Dickens through this musical – and might be surprised that the Victorian writer didn’t put songs in it.

Musical director Gary Spruce, at the helm of a fine orchestra, sets the tone and the show gets off to a cracking start with a well-drilled and beautifully voiced chorus of orphans singing with wistful enthusiasm about food, glorious food.  Oliver (cute as a button George Westley-Smith) speaks out against his lot by asking for a second helping of gruel, and is sanctioned for it.  He is sold to an undertaker (a suitably creepy Paul Forrest) in a kind of ‘work unfair’ programme, but he escapes from this bullying and exploitation only to fall in with a den of thieves as soon as he gets to London.  Westley-Smith is almost too little, his vulnerability too pronounced, to be the 13 year-old Oliver professes to be, but he sings like an angelic choirboy.  The aching loneliness of Where is Love? will break your heart.

Nick Owen is good fun as the bombastic Mr Bumble, at his best in tandem with Sue Resuggan’s Widow Corney.  Their duet, I Shall Scream, is hilariously staged, a music hall song among the ballads and big show tunes.  Oscar Cawthorne makes a chirpy Artful Dodger and Phil Leonard’s Bill Sykes is pure menace, his shadow looming across the backdrop before he makes his entrances.  Megan Doyle is sweet and knowing as Bet, but it is Charlotte Dunn’s Nancy that is the beating heart of the production.  In a West End worthy performance, Dunn belts in proper theatrical Cockney – Her searingly heartfelt As Long As He Needs Me isn’t a love song, but an abuse victim justifying her position to herself.  Bart, you see, sneaks in the darkness of the Dickens novel, among some of the brighter moments, although he affords lovable rogue Fagin an escape from the gallows to which Dickens consigns him.

Hugh Blackwood’s Fagin – a gift of a part to any actor – is everything you would want.  Funny, sentimental, conniving, this Fagin looks particularly well-fed off his child exploitation racket.  You can bet he hasn’t been DBS checked.

Stewart Snape’s costume designs are characterful and do most of the evoking of the period.  James Booth’s higgledy-piggledy, hotchpotch of a set gives us all the locations at once, so it’s down to the lighting, also by Booth, to define the time and place of each scene.  For the most part, it’s highly effective and director Tiffany Cawthorne delivers the goods.  There are a couple of moments, unfortunately both of them crucial to the plot, where the action lacks focus.  The arrest of Oliver at the end of the first act, and the manhunt for Sykes in the closing moments, both suffer from an overly busy stage with too much going on for the audience to know where to look.  This is easily tweakable though, with lighting cues, or freeze frames, or whatever.

Above all, the show is a chance for the talented members of the Crescent to impress and entertain.  The choral singing is especially lovely from both kids and adults alike.  This production does a wonderful job of reminding us why we keep going back to Lionel Bart’s Oliver! and keep on asking for more. 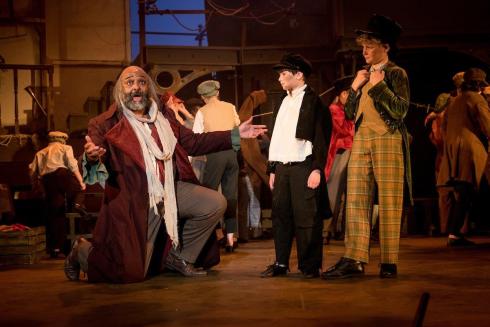 Done to death by school and am-dram productions and overly familiar from the film version, Lionel Bart’s Oliver! remains the quintessential British musical – it takes a high quality professional production such as this to remind us of the fact.

It begins in the workhouse. It is dark and grim. The kids are drilled, militarised, and live under a reign of terror. They subsist on meagre gruel and can only dream (and sing) about the kind of fare enjoyed by the elite. But the kids’ spirit is not broken. They push forward one of their number to demand an improvement in their conditions. When Oliver Twist utters the immortal line, “Please, sir, I want some more” he is speaking out against the system and its inadequacies. Of course this is not viewed as a legitimate grievance and the boy is swiftly removed from the situation – he is sold off to anyone who’ll stump up the asking price. There will be no revolution. We follow Oliver and his descent into the criminal underworld although he is largely a cipher. Things happen to him not because of his actions or decisions. The only time Oliver is proactive is when he runs away from the undertakers who bought him – he rejects his ill treatment in their hands. Rather than tacitly accept it, he flees to London and puts himself in danger of his life. From this point on, he is a victim of circumstance and of other people. It’s far from the best role in it and the character can come across as insipid. In the performance I saw, the Oliver (Sebastian Croft) only really showed any spark when he was singing. “Where is Love?” was particularly strong.

Mr Bumble (Jack Edwards) and Widow Corney (Suzie Chard) make a strong impression in their scenes together. At first they are flirtatious, not bothering to disguise their mutual sexual attraction. This is contrasted later when after only two weeks of married life, their antipathy and hatred are just as palpable. They epitomise the spirit of this Cameron Mackintosh production. There is a playful smuttiness to the stage business; the sordid and seamy sides of life are very much in evidence, and it is so refreshing. The show buzzes with an energy that keeps it alive. Some of the numbers are played at a faster tempo than is usual and it works. The production feels fresh but doesn’t take liberties with the source material.

Oliver encounters the Artful Dodger (Max Greisbach – who has nailed the accent but not the delivery. He’s like a tiny William Shatner doing Dick Van Dyke doing EastEnders), who takes him to Fagin, played, I shit you not, by Neil Morrissey.

And he’s bloody good too. Fagin is on the surface a despicable figure, fencing stolen goods, exploiting children for ill-gotten gains. There is no way in hell he would pass a CRB check. His main source of income appears to be the “nose rags” picked from pockets of the well-to-do. All hanky and no panky. Fagin is a parental figure to his gang of boys. The symbiosis is mutually beneficial. The scenes in his den contrast with the state-sanctioned conditions in the workhouse. In Dickens, this is a comment on society, a clarion call. In this musical, it’s all a bit of fun.

Morrissey shines. He looks like Bill Bailey, fallen on hard times and having contracted a wasting disease. He’s in good voice and the characterisation presents a rounded figure. “Reviewing the Situation” is nigh on perfect.

There is only one moment they should cut: Fagin is playing with his jewels, the hoard he has put by for his old age and there is an inevitable in-joke, a reference to Bob the Builder. It’s unnecessary. Morrissey has won us over and proved his mettle long before this point; we don’t need to be reminded of his former “glory”. Soon, the role will be taken over by Brian Conley – I wonder if his “It’s a puppet” catchphrase will somehow be shoehorned in and I shudder.

Samantha Barks is an earthy Nancy, who clings to her abusive boyfriend because he at least brings a sense of stability to her existence. I’ve always been uncomfortable with the character’s willingness to suffer physical and mental abuse, with my latter-day sensibilities and all that, but “As Long As He Needs Me” is the highlight of the show. Barks’s vocal punches you in the gut and tears your heart out. It is stunning.

Evil stalks the stage in the figure of Bill Sikes, (an excellent Iain Fletcher), a sinister psychopathic brute. Stephen Moore is the kindly, upright counterpart, Mr Brownlow, who, thanks to Dickensian plot contrivance, turns out to be Oliver’s grandfather.

The crowd scenes are spectacular and, with choreography by Matthew Bourne, no one hooks their thumbs behind their lapels. The cliché is avoided but our expectations are met and exceeded by this fresh and invigorating look at a well-worn classic show. 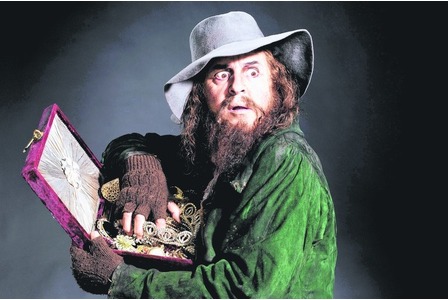