Moliere’s Les Femmes Savantes is updated here by Ranjit Bolt – I say ‘updated’, the action is set firmly in the 1980s, yet this biting satire still has much to say to us today. Written in verse, the dialogue is heightened for comic rather than poetic effect. The production does not hide its artificiality – sparing use is made of asides, but it’s clear the situations and the characters are fashioned in such a way to make a point.

We are in the house of Chrysale (Peter Temple) an easy-going fellow, whose wife rules the roost. She is power-dressing Philaminte (Julia Watson), a formidable matriarch with a thirst for knowledge. She is the fly in the ointment – her domineering attitude will not allow younger daughter Henriette ( a winsome Vanessa Schofield) to wed poor but honest Clitandre (Joshua Miles), preferring to marry her off instead to pretentious poet Trissotin (a preening, beret-wearing Paul Trussell) in order to satisfy her own intellectual pretensions. Trissotin is truly awful as a poet, declaiming his verses as he strides along the coffee table. Clitandre is by contrast a less meaty role but Joshua Miles gives him the backbone he needs to stand up for what he wants.

Meanwhile, deluded cougar Belise (a sultry Joanna Roth) wants to get her claws into Clitandre, add to the mix Miriam Edwards as cheeky housemaid Martine, and hilarity ensues.

The play is in favour of the education of women, to be sure, but to me it is more about the sacrificing of femininity in order to succeed in a man’s world. There is something Thatcheresque about Philaminte – all the writers she admires are male, incidentally. Her maternal instincts are subdued in favour of pseudo-intellectualism, almost to the destruction of her marriage and family.

It’s fast and funny, comical and clever. Bolt’s adaptation keeps the spirit, shape and meaning of the Moliere original while making the references relatable to those of us who survived the 1980s, and it’s performed by a flawless ensemble who heighten their playing just enough to accommodate the verse. Funniest of this funny bunch though is Katherine Manners as elder daughter Armande, whose shoulder-padded blazer is at odds with her tartan mini-skirt, as she seeks to suppress her sexuality in favour of ‘higher’ things. There is strong support from Paul Hamilton as Artiste and Valentine Hanson as rival poet Vadius.

Libby Watson’s stylish set is elegant in its simplicity, dominated by bookcases just as the household is dominated by Philaminte’s book-learning. Mike Robertson’s lighting washes the set in acidic colours – director Hamish Glen gives us dumbshows during transitions between acts to a soundtrack of 80s hits.

It all adds up to a delicious evening of comedy and social commentary. It’s like finding a snake in a box of chocolates and being pleased to see it. 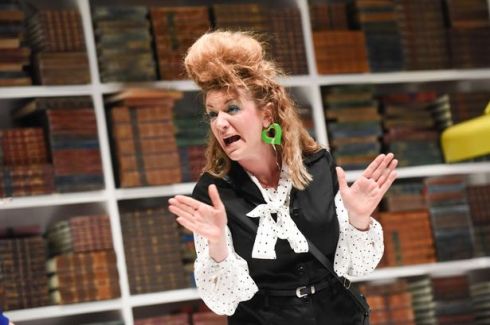 Plain speaking. Brummie maid Martine (Miriam Edwards) tells it like it is.