Simon Higlett’s gorgeous set has more than a touch of Downton Abbey about it – in fact this production is like watching the TV show but with proper drama. Shakespeare’s early rom-com is given an Edwardian treatment by director Christopher Luscombe, who does not stint on neither the rom nor the com. The comic business complements the script – unlike some productions where funny ideas are imposed on scenes – and the result is an absolute joy of a show.

Sam Alexander is the King of Navarre, recruiting his mates into a pact involving three years of abstinence and celibacy. Of course, any rules spelled out in a story are bound to be broken – remember Gremlins? – and so the comedy of the first half unfolds, with each member of the brotherhood breaking the rules and being discovered. Alexander is the cuddly Hugh Bonneville of the group and is more than ably supported by William Belchambers as Longaville, Tunji Kasim as Dumaine and Edward Bennett as proto-Benedick Berowne.   The eavesdropping scene is played out on the rooftop and is superbly handled by this quartet.

Most of the rom comes from Nigel Hess’s sumptuous score and some beautiful singing by Peter McGovern as the boy Moth.

More com comes from Chris McCalphy as dull constable Dull and a highly strung Costard (Nick Haverson). John Hodgkinson is very enjoyable as he mangles English pronunciation as the Spaniard Don Armado – I wonder why he has an accent but other visitors, like the French contingent, do not… That said, Jamie Newall’s rich and fruity tones as Boyet, equerry to the French princess, are a treat to the ear.

Leah Whittaker is striking as the fun-loving Princess of France – everyone looks wonderful in the period costumes – and Michelle Terry is likeable as proto-Beatrice Rosaline.

There is plenty of mucking around attired as Muscovites and the presentation of The Nine Worthies is just lovely.

But, just as the outbreak of the First World War interrupted lives and altered things forever, the arrival of bad news from France puts a spanner in the workings of the plot. We do not get the happy ending we expect – in a masterstroke, Shakespeare detonates a surprise and nothing is the same again. Christopher Luscombe handles it superbly. The final image, of the quartet of friends in uniform, marching away, is a salutary reminder of what we are commemorating this year. 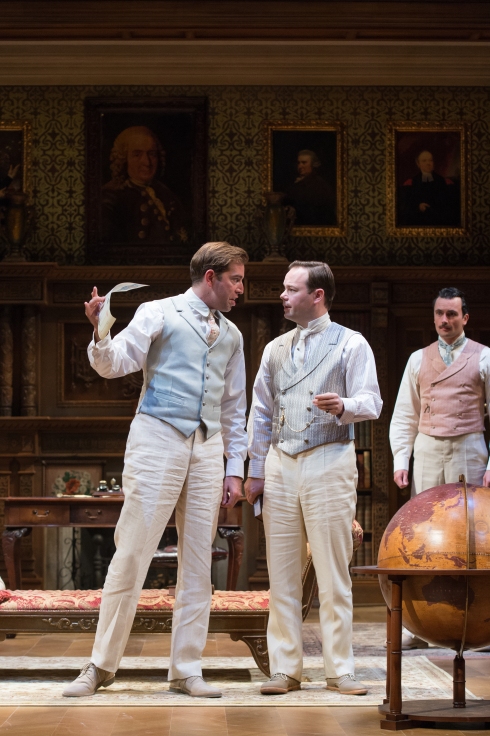 Edward Bennett and Sam Alexander, with William Belchambers looking on.