THE HUNDRED AND ONE DALMATIANS

Debbie Isitt’s adaptation of Dodie Smith’s 1956 popular classic provides a perfect package of festive fun as the REP’s Christmas show for this year.  Keeping a 1950s aesthetic in its clothes, furniture and voices, Tessa Walker’s production resonates with innocence and charm in its storytelling and theatrical brio in its execution.  Of course, we wonder how so many puppies are going to be represented; Walker and her team of talented puppeteers do not disappoint.  Jimmy Grimes has designed some economic but expressive dog and cat characters: an opening sequence of various people walking their various breeds of dog gets the show off to a delightful start.

Often, the plot calls for the puppets to hold the stage on their own.  Oliver Wellington’s Pongo and Emma Thornett’s Missis make an appealing pair of protagonists, while their human counterparts, Morgan Philpott and Nadi Kemp-Sayfi, make their potentially bland roles come alive with humorous flair and earnestness.  Lakesha Cammock brings pathos and bravery to the role of Perdita, while Mei Mac’s operating of the Persian Cat and the plucky tabby Tibbs brings diversity to this canine-dominated world.  Not only do the puppeteers demonstrate skill with the animation of their characters, they also give impressive vocal characterisations.  Quickly we overlook the artifice and begin to care for the creatures and their plight.

Of the humans, the baddies attract the most attention.  Jo Servi is the least overtly wicked as Cruella De Vil’s husband Horace, indulging and enabling her worst excesses, almost humanising her.  Luke Murphy is a lot of fun as dozy bad ’un, Saul Baddun, while Lewis Griffin shines as his energetic brother Jasper Baddun, with some hilarious physical comedy and moves that make him appear to be made of elastic, or perhaps he’s really a puppet himself!

Storming the stage in the iconic role of the vile and villainous Cruella is the magnificent Gloria Onitiri, parading around like a spoilt diva, like Ru Paul in his worst mood.  Onitiri is a scream – her wild-eyed driving is a maniacal treat.  But the production does not shy away from the story’s nasty side.  The horrors and evils of the fur trade loom large – Dodie Smith was ahead of her time in her criticism of this barbaric practice – and so while we revel in Onitiri’s performance, we recognise Cruella for what she is.

Tessa Walker maintains a fast pace, giving us laughs and tension through a myriad of inventive touches, aided by Jamie Vartan’s multi-level set, giving us cars driving off into the distance, model buildings.   A muted colour palette, augmented by Simon Bond’s beautiful lighting, gives the set a watercolour feel, like picture-book illustrations, with the only splash of colour the red lining of Cruella’s coat.

James Frewer’s original music, played live by onstage musicians and members of the cast, underscores the action with jazz-informed pieces, adding to the cartoonish feel, and there are a few good songs to heighten the mood and add to the fun.

All in all, it’s the REP’s best Christmas show for years.  It runs until January 13th – you’d be barking to miss it. 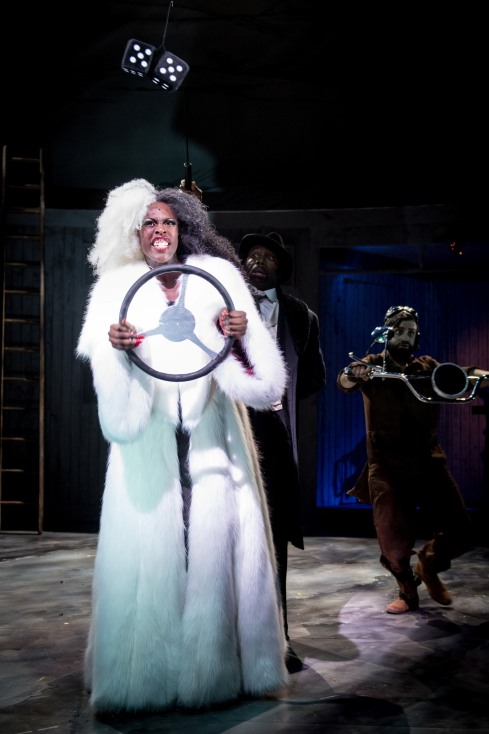