The blood of the title refers in the main to family – as in ‘blood is thicker than water’ (a saying that’s never made complete sense to me. Who has water in their veins?)

This new play by Emteaz Hussain is a two-hander, charting the relationship of young Pakistanis Caneze and Sully. Caneze (Krupa Pattani) aspires to be a pharmacist and make something of herself. That all goes out the window when Sully (Adam Samuel-Bal) climbs in. He’s a streetwise urban poet type, with his hat on backwards but his heart in the right place. They meet in the college canteen, have their first date in Nando’s… It’s a fast-moving, funny and slick portrait of young love. Hussain’s writing captures the patter and lingo of contemporary youth slang and posturing, set against a backdrop of old-school values, traditions and attitudes.

Things turn serious when Caneze’s dangerous brother Saif finds out about their trysts and sets his heavies on Sully. The couple split – until things go too far and Sully asserts himself and his love for Caneze.

It’s beautifully played. The cast of two are equally skilled and appealing. Krupa Pattani portrays different characters as though she is suddenly possessed by them, slumping back to Caneze when the spirit leaves her. Adam Samuel-Bal makes you believe the unseen characters he’s addressing are on stage with him. At any minute, you think bad guy Saif could walk onto the set.

Sara Perks’s set is mainly overlapping rectangles that reveal doors and compartments, drawers and cupboards, depending on the scene. It’s all stylishly lit by Aideen Malone – incorporating mood lighting into the construction of the set. It’s inventive and evocative.

Director Esther Richardson serves the writing well, handling the sometimes swift changes of location and character so that we are never unsure of where we are and who is talking to us. Top marks, though, must go to the cast who run the gamut of emotions and experience with energy and commitment, taking us along with them, until we care about the star-cross’d lovers and their fate. There is a pattern to Hussain’s script, almost a cycle, so you get the impression that the lovers are caught up in something bigger than themselves, bigger than everything.

Blood is funny, touching and thrilling. A big feather in the cap of Tamasha theatre company and the Belgrade. 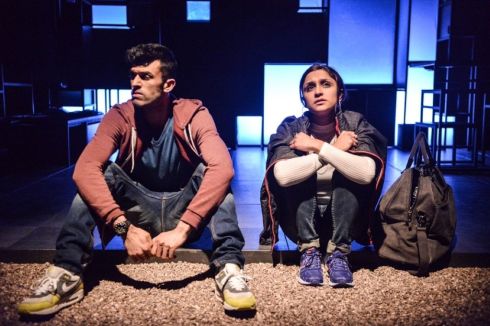