I can’t be the first to not the similarities between the work of American playwright Sam Shepard and our own Harold Pinter.  This revival of Shepard’s 1980 piece is a case in point.  There is a sense of menace coursing through the comedy, the huge chunks of characters’ lives that are unexplained, the sudden outbreaks of violence…

Matthew Dunster’s production comes with stellar casting, with King of the North Kit Harington as screenwriter Austin, and Johnny Flynn as his lowlife brother Lee.  Austin is bookish and settled into a conventional lifestyle (wife, kids…) but his work has brought him to the seclusion of his mother’s house.  His writing is interrupted by the appearance of his brother, unseen for five years and fresh (if that’s the word) from a three-month stint in the desert.  Lee is a burglar, a wastrel with anger management issues – Flynn is powerful in the frequent outbursts, and also swaggering and overbearing in this domineering role.  But Harington is not overshadowed and when, through reasons of plot, the roles are reversed, his Austin comes out of his neurotic shell, rolls around drunk, and acquires an impressive collection of toasters from homes around the neighbourhood.

Donald Sage Mackay appears as Saul, Austin’s producer, an equable counterpoint to the volatility of the brothers’ relationship, while Madeleine Potter’s absentee mother makes a brief but telling appearance in the final scene.  She seems spaced-out, an ineffectual presence – the fate of women in the American mythos.  There is a sense of disconnect here, with what is unsaid looming large – Pinter again!

Jon Bausor’s set with its exaggerated perspective shows a world askew, the angles adding to the claustrophobia.  Director Matthew Dunster brings out the humour of Shepard’s script, balanced with the savagery of the brothers.  They are koi carp trapped in the same tank.  It is with a growing sense of irony that we realise what they do not: they are the idiots chasing each other around in Lee’s terrible idea for a screenplay.  Like Tom and Jerry (the domestic violence has a cartoonish feel) they can’t leave each other alone.

That they are screenwriters is hugely pertinent.  They are both seeking to perpetuate the myths that permeate American culture: Austin’s love story, Lee’s action-packed dumb chase movie.  But when it comes down to it, we find the prescribed modes of masculine behaviour make it impossible for the brothers to function in the real world.

The show is a hot property with hot actors and heated dialogue, with searingly hilarious moments, but when it’s all said and done, and the crickets have finally shut the hell up, the lack of resolution leaves us hanging.  And this is exactly why the star of the show is Sam Shepard’s script, reminding us that life, unlike stories, is unresolved and unexplained.  Meaning is not always apparent.  Perhaps we are all in the desert, chasing each other around.

While Robb Stark appears as Romeo in Kenneth Branagh’s production just around the corner, here we get Jon Snow in a play by Shakespeare’s contemporary, Christopher Marlowe.

I’m referring of course to Kit Harington in the title role, a big name draw to Jamie Lloyd’s reimagining of the tale of the dissatisfied scholar who sells his soul to the devil in exchange for 24 years of fame and glory.  Harington (as a Game of Thrones fan boy, I am genuinely thrilled to see him!) begins in grey hoodie and spectacles – his Faustus is more of a mature student at the Open University, than a cap-and-gowned Don.   In his grotty flat – think retro motel room – he summons demons.  They don’t have far to come: they watch from all corners of the set, attracted by Faustus’s blasphemous utterances.  The mighty Forbes Masson comes forth as Lucifer, a bald man in grubby vest and pants.  Hell, it emerges, is where you spend eternity in the same underwear.  Menacing and darkly amusing, Masson is as scary as he can be for someone who has forgotten his PE kit.  Compellingly charismatic is Jenna Russell (she who can do no wrong) as Mephistopheles – her karaoke opening to the second act is wickedly funny. She has a deadpan unpredictability that is this production’s real treat.

You’ve gleaned by now Lloyd does not take a traditional approach.  The adaptation by Colin Teevan interpolates new scenes that serve to make Faustus’s glory years more accessible to today’s audience: he becomes a celebrity magician, a kind of Derren Copperfield, of rock-star proportions, entertaining world leaders and getting his face on T-shirts.  Harington is certainly charismatic in this context – his Bill & Ted air guitar riffs only become a little annoying, and the way he declaims his lines suits Faustus’s personality from the off: Faustus is a pompous man whose arrogance brings about his downfall.  The set (by Soutra Gilmour) comes apart, and is revealed to be part of his show.  Canned laughter underscores the dialogue – reminding us that everything is illusion, especially what is promised by the devil…

Off come the hoodie, jeans and singlet.  On go the blood, sweat and tears.  Harington flails around, almost Christ-like, as his time runs out.  His relationship with Wagner (Jade Anouka) makes you hope he can be saved, even though you know he can’t, and makes you hope we can find our own salvation in the love of someone else.

It’s an extremely busy show, teeming with ideas that collide and rebound.  Most of them hit their mark.  There is sheer brilliance when Tom Edden’s Good Angel embodies all seven of the deadly sins in turn.  Evil Angel Craig Stein, in lingerie, struts and pouts in a provocative manner.

The ensemble of demons in their pants create nightmarish tableaux, like Bosch in a bedsit.  There are visual gags, even an actual ball gag, and aural gags, and scenes to make you gag.  But while we wish no harm would come to Harington and his marvellous physique, what is the show getting at?

The set closes in, returning to its original configuration and we are back where we started, except a girl lies raped and murdered, and Faustus revolves on the spot, as though dancing with an invisible demon, forever in a K-hole.  Perhaps the whole thing, the whole 24 years of fame and glory have been nothing but an illusion, and Faustus in a drug-fuelled session has let his rock-star excesses get out of control, bringing about his own damnation.  His longing to feel something, to experience rather than study something, is what leads him astray… That Faustus is inspired to conjure demons by something he reads on the internet may be significant…

There’s never a dull moment.  Lloyd pricks and titillates our imagination.  Shocks are quick and fleeting – there’s always another one along in a minute.  This Doctor Faustus is an enjoyable if at times baffling experience, intense and also frivolous, with plenty of dark and nasty fun, played out by an excellent ensemble. Ultimately, though, it’s like listening to someone tell you about their dreams: you wonder what it’s got to do with you. 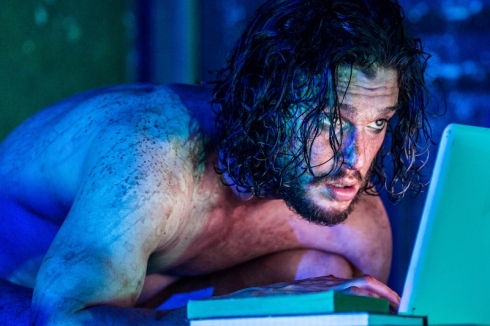