This jukebox musical, inspired by and including songs made famous by Elvis Presley, turns out to be the epitome of the genre. No one is more delighted than I. There is even a jukebox on stage.

What sets this one apart from the others doing the rounds is its sense of humour. It knows it is froth and doesn’t take itself at all seriously. The plot borrows heavily from shows like Footloose and Hairspray but also from Shakespearean rom-coms, Twelfth Night and As You Like It. Almost everyone in it is a star-crossed lover, with their heart set on the wrong person. Complications mount up until the final scene, and there are lots of laughs along the way, killer songs that just keep coming, and boundless energy from a lively and talented chorus.

Ben Lewis is guitar-playing roustabout Chad who rocks up in a nameless Midwest town; he’s part-Elvis, part-Fonz with his jukebox-mending magical touch, and there is also more than a hint of Johnny Bravo. He falls for the local museum curator (Kate Tydman) but it is Natalie (Laura Tebbutt) the local mechanic who sets her sight on him – to the extent that she dresses up as a guitar-playing roustabout in order to spend time hanging out with him. Chad finds Ed strangely alluring, and so does the museum curator in scenes that resemble Olivia and Viola, and Viola and Orsino. It’s all silly fun, played with verve by the young leads, and there is an amusing turn by Mark Anderson as Dennis, a nerd in love with Natalie…

A subplot involving interracial couple Lorraine (an excellent Aretha Ayeh) and Dean (an appealing Felix Mosse) hints at a darker world beyond the town’s limits, but the show doesn’t dwell on such unpleasantness. Their rendition of It’s Now or Never is a comic highlight, hilariously staged by director/choreographer Karen Bruce.

Bruce keeps the action fluid, using a versatile, stylised set (by Morgan Large) and a plethora of amusing props and ideas. Sian Reeves stalks around like a crab with a loudhailer as puritanical Mayor Matilda, the nominal villain of the piece – you may know what’s coming but it’s fun seeing it happen. Shaun Williamson is in great form as Natalie’s dad, Jim, a lonely widower; his singing voice is perfect for Elvis numbers and he uses his physicality to comic effect.

But it is Mica Paris who takes the honours as sassy bar owner Sylvia. Her delivery of sardonic one-liners is spot on and, of course, her singing is stupendous. I got chills, they’re multiplying – oops, wrong show. 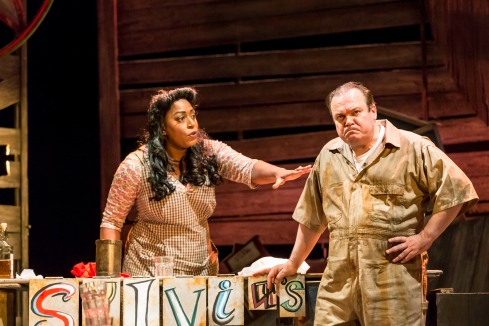