Loosely inspired by English history, this story of one of the favourites of Queen Elizabeth begins with an overture that includes a sinewy rendition of ‘God Save The Queen’, quite anachronistically, before building up to a frenetic series of crashing chords; conductor Carlo Rizzo throws himself around energetically.  It’s an exhilarating opening.

Elizabeth loves Roberto, but Roberto loves Sara, wife to his best mate, the Duke of Nottingham.  Roberto stands accused of treason but Elizabeth offers him a get-out-of-jail-free card.  He can go free if he names her rival for his affections.  Roberto would rather die than put Sara in the frame.  There’s some business with love tokens (a ring from Elizabeth, a scarf from Sara) and the Duke of Nottingham rumbles what’s going on…

Director Alessandro Talevi eschews the grandeur of the Elizabethan court and sets this love quadrangle in a dark world of shadows and screens.  Elizabeth keeps a spider in a tank – perhaps this signifies her treatment of Roberto, keeping him as an exotic pet but one that can bite… Later, it emerges that it is she who is the spider, as she careers around in a chariot like a giant robotic arachnid.  Talevi brings surprises to the melodrama.  The bald queen stalking around on mechanical legs while her favourite languishes in prison, caught in scarlet strands – his entanglement in the web of Elizabeth’s emotions. 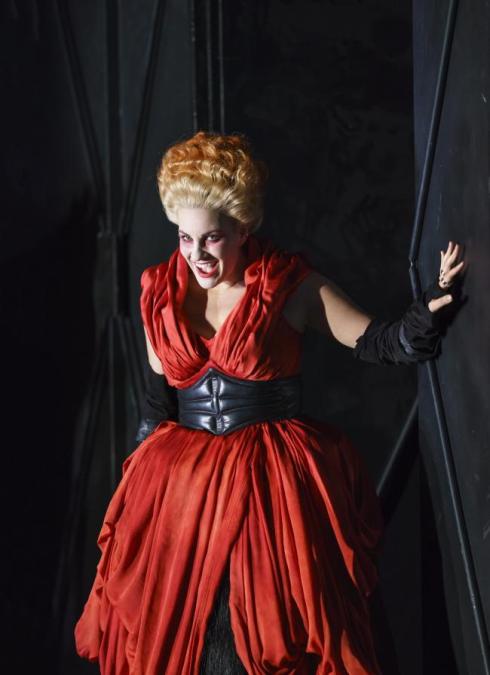 Joyce El-Khoury is magnificent as the tyrannical queen, giving us the regal power of the monarch and the volatile emotions of the woman.  She commands the attention whenever she is on – not just because she is a splash of vibrant colour in an otherwise monochromatic setting.  Also strong is Justina Gringyte as the noble, distressed Sara, fighting her feelings for Barry Banks’s robust Roberto.  Roland Wood’s passionate Duke, pleading for the life of his friend is lovely stuff.

The marvellous WNO chorus have their moment in the spotlight with a solemn, hymn-like piece, while the orchestra play Donizetti’s stirring score with verve and beauty.  Madeleine Boyd’s design work owes more to the 19th than the 16th century, with a touch of Vivienne Westwood and Jules Verne thrown in.  It’s all very stylish, a world with its own rules rather than any attempt at historical reconstruction.

This is a striking, powerful production with a tour de force performance by El-Khoury at its heart. 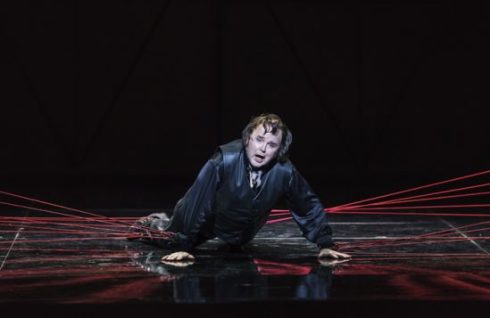