Tag Archives: Journey to the Centre of the Earth

Oddsocks Productions, renowned for their adaptations of Shakespeare and other classic works, have other strings to their bow.  One of those strings is the R.O.G.E.R. Radio format.  This is the second of their shows in this format.  The premise is simple but rich.  The plots are framed as live recordings of radio drama at which we are privileged to attend and in which we are invited to participate.  The cast of three, in evening wear, create all the characters through vocal work, and provide sound effects in the time-honoured way (shoes on a tray of gravel) and also in some inventive ways, often exaggerated to cartoonish extent.

But there is more to it, another level.  There is a tension between the performers outside the story they are performing.  We are constantly pulled out of the fictional world they create and into another one.  Added to that are the visual gags, unsuitable for a radio play, that give us the theatre audience plenty to look at.  Perhaps I’m making it sound more complicated than it is.  Perhaps it’s like trying to explain a joke; a joke dismantled is robbed of what makes it funny.

And this show is relentlessly funny.

We are treated to a double bill of classic stories.  First up is Jules Verne’s Journey To The Centre of the Earth – a Boy’s Own adventure of exploration and discovery.  Played straight, the radio drama would paint pictures in our minds.  We would imagine all the special effects better than any Hollywood adaptation.  Here, there is an element of that but we are constantly drawn back to the radio studio and the creation of the piece before our very eyes.  The story falls secondary to this organised chaos.  The story is a coat-stand on which to hang all the silliness of the format.

Being an Oddsocks show, there are wild wigs and silly voices and even puppets.  The script by director Andy Barrow and Elli Mackenzie is riddled with double entendres, double talk, word play and silliness.  There is a running gag with an echo in a bucket that, just as you think it’s wearing thin, reaches its hilarious pay-off.  Barrow knows what he’s doing – the pacing is spot on.  There is, inevitably, audience participation; my contribution to a flock of doves sounded more like a Trimphone but there is something marvellous watching hundreds of people shouting lines from cue cards in funny accents.  We are a nation brought up on pantomime after all.

The second story The Lair of the White Worm is the more coherent narrative of the two.  It’s as though the first one is the set up for the second, familiarising us with the conventions of the piece.   Bram Stoker’s gothic melodrama has a range of weird characters that lend themselves more readily to an Oddsocks parody. It is also rich with Freudian symbolism which means, in this case, an unending supply of knob and hole jokes.  It’s cheeky schoolboy stuff but never grubby or puerile.  There are mongooses (Mongeese? Mengeese?) who meet sticky ends; animal cruelty has never been this funny.

Andy Barrow himself leads his company of three.  As resident genius of the company, he is a theatrical force to be reckoned with.  Joseph Maudsley has a suave, self-satisfied air as he pulls off some of the trickier sound effects, in role as a smug actor playing these characters.  And it’s a pleasure to see Susie Riddell back with the company.  All three are vocally versatile, energetic and disciplined.  That said, there is room for manoeuvre and improvisation when things don’t go exactly to plan.  A cleaver fails to hack through a cabbage.  An attack with a water-sprayer becomes too enthusiastic… You have to see these things to appreciate them in context.  The accidents keep the show fresh for the actors.  Clearly they are enjoying themselves immensely.  That enjoyment transmits to the audience.

It’s a winning formula and I look forward to further stories receiving the R.O.G.E.R. Radio treatment.  This production deserves to be seen by a wider audience in a range of venues across the country.  It’s Round the Horne on Red Bull, The Goon Show on a sugar overdose.  You’d be hard pressed to find a funnier and more gloriously silly night out. 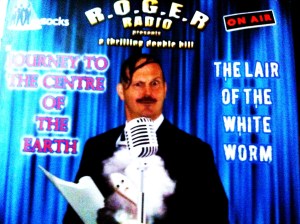