Working in collaboration with Hull Truck Theatre, the RSC brings us this new play from writer Richard Bean – of One Man, Two Guvnors renown.  It’s the eve of the Civil War and the country is already divided.  In Beverley, Sir John Hotham is torn.  Should he support the King or Parliament?  He flipflops between sides, playing each against the other, until his equivocations overtake him and he is arrested and – well, spoiler alert: the play begins with his execution.  Knowing Hotham’s fate from the off removes suspense but his path to the chopping block is a twisted and entertaining one.

As the double-dealing Hotham, Mark Addy gives a star turn, brimming with Northern bluster and human failings, like a Tory jumping ship from Leave to Remain and back again.  This is One Man, Two Guvnors in period costume.  Caroline Quentin is his cooler-headed wife (the latest in a long line) but nonetheless funny.  Sarah Middleton is a scream as their daughter, Frances, a giddy, histrionic young girl tearing around and even rolling into the laps of the front row.  In contrast, her brother Durand (Pierro Niel-Mee) is straight-laced and academic – until his own ardour is aroused, of course.  Canny servant Connie (Laura Elsworthy) and decrepit old pantaloon Drudge (an unrecognisable Danielle Bird) complete the household, embodying dry wit and physical clowning respectively.

There is a double act of young suitors in the shape of James, Duke of York (Jordan Metcalfe) and Prince Rupert of the Rhein (Rowan Polonski) who, for reasons of plot, dress as lady fishmongers.  Both Metcalfe and Polonski are appealing presences and very funny.  Also good fun is Ben Goffe as King Charles himself, mounted on a hobby horse – Goffe also makes an impression as the ghostly figure of a young girl murdered for breaking a vase.

Bean populates his five-act comedy with stock characters, making a farce of historical events and peppering the dialogue with sharp relevance.  Hypocrites who seek to further their own ends at the expense of integrity – they should meet Hotham’s fate!   The religious and the spiritual also come in for a lambasting.  The puritanical Pelham (Neil D’Souza) and the hedonist Saltmarsh (Matt Sutton) are held up as excessive figures – the comedy arises from the exposure of weakness and appetites common to humans and both celebrates and mocks our foibles.

Director Phillip Breen pays attention to fine detail as well as broad comic playing.  At times the action is chaotic – or seemingly so, as choreographed chases and fights break out.  The acts are separated by rousing songs (by Grant Olding) performed live and on stage.  Phill Ward is in excellent voice with his stirring agit-prop anthems that bring to mind the songs of recent folk-rock group The Levellers.

The show is consistently funny in a theatrically traditional way but it is more than a farcical reconstruction; it speaks to us directly.  We are today in a divided country.  We are caught up in epoch-changing political events – we can only hope that, unlike Hotham, we don’t lose our heads about it. 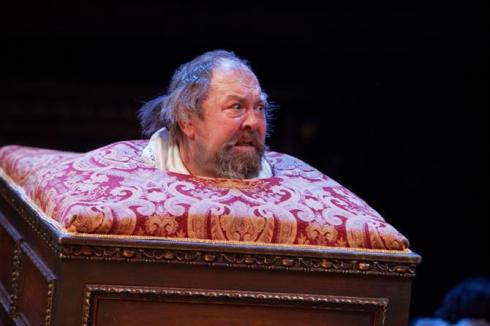