A Visit to the Gents

THE TWO GENTLEMEN OF VERONA

One of Shakespeare’s earliest comedies and – guess what – it’s very funny. The script effervesces with word play and there are some good groanworthy gags to boot. The cast in Simon Godwin’s easy-going production handle the convoluted verbal sparring apparently effortlessly, and comic set-pieces (monologues and a double act) are played to the hilt with expert timing.

Michael Marcus is a dashing, upright Valentine, a likeable young man leaving home to make his way in the throbbing metropolis that is Milan. He’s a decent cove so we’re on his side when he plots to steal away Silvia, the object of his affection, from her lofty accommodation with the aid of a rope ladder. The plan goes awry and Val finds himself banished. Meanwhile, his BFF Proteus (an excellent Mark Arends) is sent to join him, parting with such sweet sorrow from his girlfriend Julia (Pearl Chanda). As soon as he claps eyes on Silvia, Proteus changes his affections and sets out to have the girl to himself by whatever means.

He’s a villain, driven by love, a selfish kind of love. You wonder why Julia bothers to come after him, disguised as a boy.

In this play Shakespeare sets out his stall for comedies to come. The best ideas here are reimagined in later works: Julia as a page, delivers letters to Silvia (c.f. Viola and Olivia in Twelfth Night); a comic routine detailing the virtues and vices of a milkmaid chimes with Dromio’s spherical woman in Comedy of Errors… The lovers’ tribulations come to a head in the wild, lawless world of a forest… (Midsummer Night’s Dream). In this respect, this fun and enjoyable production would serve as an excellent introduction to Shakespeare.

Roger Morlidge (Launce) and Martin Bassindale’s Speed are the clown roles, intercutting the main action with comic business that never gets in the way of the inherent humour of the text. The former’s dog, Crab, (an adorably scruffy ‘Mossup’) inevitably steals every scene in which he appears.

Pearl Chanda is an appealing Julia, supported by perky, sometimes downright bawdy maid Lucetta (an energetic Leigh Quinn). Sarah Macrae is elegant and chic as the beautiful Silvia – the costumes (Italian, 1950s-60s) look their best on her. Jonny Glynn’s Duke of Milan brings gravitas and cunning – his surprise exclamation of ‘Booyah’ intimates that we are not meant to take him too seriously. The mighty Youssef Kerkour appears in a brief cameo as Sir Eglamour, but one of the undoubted highlights is prat-on-the-make Turio’s rendition of the song Who Is Silvia? – Nicholas Gerard-Martin brings the house down in a superbly realised moment.

Also handled very well is the play’s problematic ending – perhaps it’s only problematic to our cynical postmodern eyes – as Valentine forgives Proteus for all his wrongdoing. I found the reconciliation rather touching.

The RSC has a hit with this seldom-performed treat. Visually beautiful, with some lovely live music (by Michael Bruce) this stylish and accessible production hits all the right notes in all the right places. 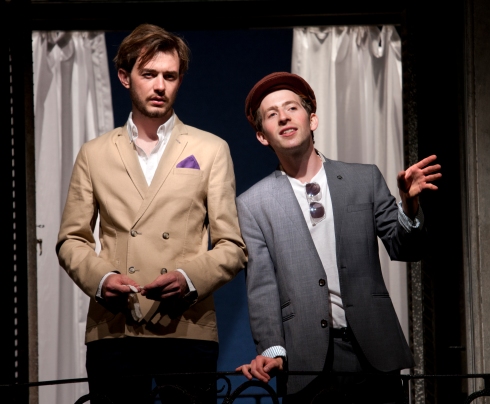