THE MERRY WIVES OF WINDSOR

Fiona Laird’s joyous staging of Shakespeare’s farcical comedy turns out to be the funniest RSC production of the Bard in a long while.  Blending the Tudor with contemporary Essex (familiar from so-called reality television), the design manages to be both traditional and fresh (the skeletal Tudor buildings are everything!), yielding delightful costume choices, designed from scratch by Lez Brotherston.  Check out Mistress Ford’s high collar and skinny-fit trousers in the illustration below.  This aesthetic enables David Troughton’s Sir John Falstaff to sport a John Bull waistcoat over a pair of baggy slops – with an ever-present, priapic codpiece.  Later, his anyone-for-tennis garb highlights how old-fashioned his brand of lechery is; he is an interloper in this glamorous suburbia, and the women, complete with TOWIE accents and dress sense, are empowered totally.  The play is an antidote to the problematic sexual politics of The Taming of the Shrew.

Troughton’s Falstaff is everything you could want in the Fat Knight, brought low by his appetites – which is a staple of comedy: to mock Man for his baser desires.  Ruling the roost, running rings around Falstaff and tying him in Windsor knots are Beth Cordingly as Mistress Ford, and Rebecca Lacey as Mistress Page.  Their machinations belie the Essex stereotype of the dim-witted glamourpuss unable to walk and chew gum at the same time.  Their attire may be in dubious taste but their characters and antics are to be admired. Cordingly and Lacey are clearly having a great time – and this enjoyment transfers to the audience.

Indeed, the watchword of the production is Fun.  We know the plot is convoluted nonsense but we are able to take such delight in this retelling, thanks in no small part to the comedic skills of a talented ensemble.  Jonathan Cullen’s French doctor Caius would put Inspecteur Clouseau to shame with his mangling of the English language and his histrionic carryings-on; Vince Leigh’s Ford dons a ridiculous nose-and-glasses disguise, along with a compare-the-meerkat accent.  Subtle, it ain’t, but it works magnificently.  David Acton is also a hoot as Welsh parson, Sir Hugh, while Ishia Bennison’s Mistress Quickly and Katy Brittain’s Hostess of the Garter (all big hair and leopard print) are hilarious creations.  Tom Padley is spot on as thick-as-a-brick Slender, more than a little reminiscent of ‘celebrity’ Joey Essex in his delivery; Karen Fishwick’s Ann Page is all duck-face pouts into her smartphone and teenage surliness. Tim Samuels is nasally officious as Shallow, the Justice of the Peace, while Josh Finan makes an impression as Falstaff’s rugby-shirted follower, Nym.

The playing is as broad as the accents and Laird imbues the show with a knockabout style that suits the age-old comedic conventions of the piece, mixed with some present-day references to keep things fresh.  The traditional laundry basket is supplanted by a big pink wheelie bin, and it works brilliantly.  Surely, even the most stuck-in-the-mud purist would chuckle.  Similarly, an action sequence in which Falstaff, disguised as the Fat Witch of Brentwood, is roundly chased off the premises, is a moment of chaotic, cartoonish bliss.  His parting shot, a quote from Dick Emery, reminds us how out-of-synch he is with this world.

I would like more to be made of the spooking of Falstaff in the final act; the scene seems to be over too quickly but, for the rest of it, the pacing is impeccable, and Laird’s attention to detailed comic business is superb.  She has also graced the production with an original score of her own composition, blending period flavours with contemporary beats and sit-com stylings.  It is delicious.

A wildly entertaining romp, triumphantly hilarious, this is a Merry Wives to savour. 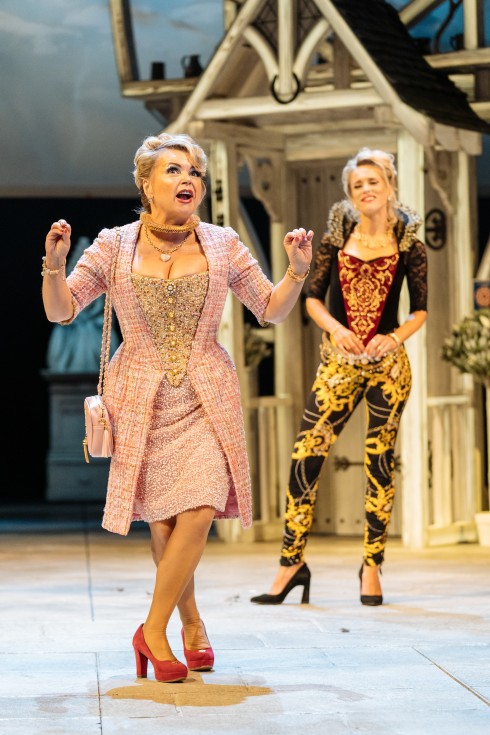