Close Encounters of the Brief Kind

Emma Rice’s adaptation of the Noel Coward script makes a triumphant return to the REPa decade since its first incarnation.  Trimmed down to a jam-packed 90 minutes, this new production is a roller-coaster of theatrical invention and charm.  The illicit, irresistible romance of central couple Alec and Laura plays out in a crazy, stylised world in which the other (working class) characters act as a kind of chorus, their own uncomplicated love lives contrasting with the restraint and guilt of the protagonists.  It strikes me, this time around, how much the elements play a part in the telling of this story: air, fire and water are particularly prevalent, in the wind that blows through the station, and water in the waves of emotion that wash over the scenes… A fire is present and the earth, is represented I suppose, by the stacks of coal to one side.  The most elemental force in play though is Love.

Jim Sturgeon is every inch the English gent as Dr Alec Harvey, going against type to express his feelings.  He is matched by guilt-ridden Isabel Pollen’s Laura.  It’s all ‘teddibly, teddibly’ in its stuffiness but the emotions come up fresh and relatable.  They are surrounded by supporting players (sometimes, physically supporting!) with old-fashioned accents – the show strongly presents a bygone age: the romance of steam locomotion, when brandy was thruppence a glass, when middle class morals defined action… Propriety has given way to political correctness in society – and this is not a bad thing, but this quaintly English piece (English in its humour, its tea-drinking) is deliberately skewed away from the naturalistic.  The world was never like this, so don’t get too nostalgic for what didn’t exist.

Beverly Rudd absolutely shines as café girl Beryl, among other roles, and Lucy Thackeray’s Mrs Baggott is a remarkable characterisation and no mistake.  Dean Nolan, who also doubles as Laura’s becardiganed husband, is a lot of fun as railway worker Albert, while Jos Slovick’s Stanley leads the singing, his voice at odds with his silly hat.

This being a Kneehigh show, there is live music almost throughout, played by the cast and a complement of musicians.  A few Noel Coward numbers are included, because it’s not just about the brilliance of Emma Rice, you know.  The production reminds us of Rice’s skills and insights as a director.  There is much playful sophistication behind her ideas: Alec and Laura swooning in love, rising on chandeliers, the splash of water as they each tumble into a river, the puppet children being beastly to each other… The show bursts with ideas we appreciate on an emotional as well as analytical level.  The form delivers the content in a symbolic, stylised manner enabling us to engage emotionally, rather than keep us distant through theatrical alienation.

Exhilarating entertainment that reminds us why we fell in love with theatre in the first place, this is an all-too brief encounter with brilliance and a ride you don’t want to miss. 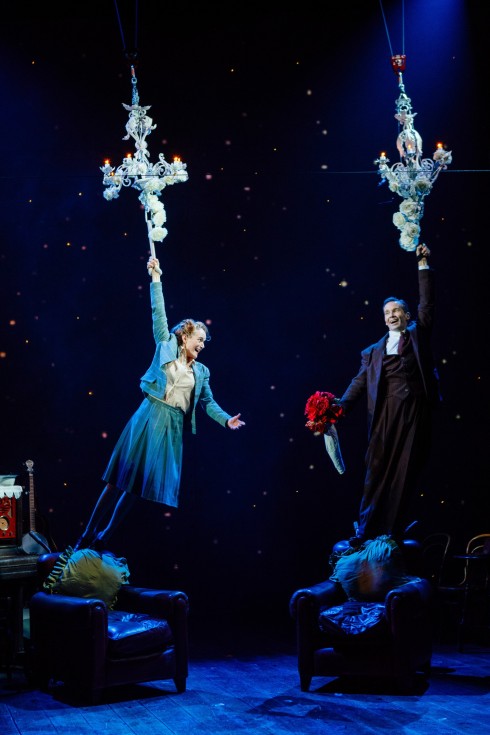 Isabel Pollen and Jim Sturgeon getting a bit carried away