John Godber’s 1984 comedy is doing the rounds in this new revival by Fingersmiths, a company that incorporates deaf actors and British Sign Language into plays.  Having seen their Frozen (not the Disney one!) a while back and knowing how effective their approach is with a drama, I was interested to see how they’d manage something lighter.  BSL, a visual language, with its gestures and exaggerated facial expressions lends itself very well to comedy, it turns out.  There is one point when it’s purely signed and I can’t follow it – a clever way of demonstrating what it must be like for the deaf when there are no signs or captions.

The plot is nothing groundbreaking: a ragbag team of underdogs strive toward a common goal.  In this one, it’s a pub rugby team struggling to win against the odds.  It’s all because of a rash wager made by Arthur (Wayne Norman).  He bets his house, but the terms of the bet are reduced to three grand.  And so, the stakes aren’t all that high, the jeopardy isn’t that perilous… In the event, it’s not the plot that keeps me interested.  The production is a triumph of form over content as the sign language is supplemented with surtitles and voice-overs, each cleverly and wittily included.  That Arthur can’t speak BSL adds another obstacle to his challenge, and leads to some cringeworthy moments as he persists in raising his voice in order to communicate!

The team is comprised of Frank (Matty Gurney), Steve (Stephen Collins), Tony (Nadeem Islam), and Phil (Adam Bassett).  Each of them is, shall I say, a lovely mover, skilled at heightened expressions, working with clarity and precision.  I was concerned my ignorance of both rugby and sign language would be a barrier to my enjoyment.  I needn’t have worried.  Collins warms into his role nicely, demonstrating excellent comic timing.  Islam is graceful – in a cartoony way.  Bassett performs a dream sequence, a piece of dumb show to a voice-over, that is highly effective, and Gurney, the largest of the group, is both an imposing presence and a subtle one.  Each man brings something to the ensemble and they all get loads of laughs.

The only female in the cast is Hazel (Tanya Vital) the ‘grown-up’ recruited to get these man-children into shape.  Vital also operates as a narrator, starting us off with a prologue and linking scenes with descriptive passages.  Godber’s writing is pseudo-Shakespearean here, elevating the humble pub team to heroic proportions.  Maybe.  Vital’s vitality is the lynchpin of the performance, our touchstone in this esoteric world.

As ostensible villain of the piece, Reg, William Elliott completes the cast, also providing sports commentary.  Added together, this is a tight ensemble.  While the play is now old hat – especially where its sexual politics are concerned – this fresh approach keeps us hooked.  I find myself more interested in the way it is done, rather than what the characters are doing.  Where it works best is the climactic match, cleverly staged: a nifty bit of costume design means the cast can play both teams at the same time.  Director Jeni Draper pulls all the elements together for a pleasing denouement, but I don’t feel the production gets beyond its novelty value to make us care for the characters and their ups and downs (or should that be ‘unders’?) 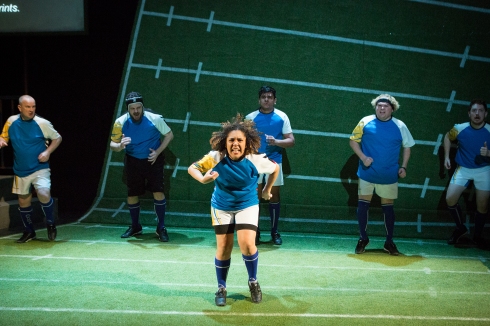 We are accustomed to seeing sign language interpreters at the side of the stage, translating plays for deaf audience members.  New theatre company fingersmiths give us much more than that in a way that enhances the performance for those of us fortunate to be able to hear.

Each of the three characters in Bryony Lavery’s 1998 play is portrayed by a pair of actors, one speaking, the other signing.  The result is more than translation.  Often the signer reveals the inner life of the speaker.  Sometimes the signs anticipate the words – it’s an intriguing psychological approach to a play that deals with the human mind, its workings and malfunctions.

And so we get parallel performances occupying the same space, but the actors are also linked, like shadows, like reflections, like twins.  It is absolutely captivating.

The play deals with the disappearance of a young girl and the subsequent arrest of a man charged with her abduction and murder.  As the girl’s mother, Hazel Maycock is superb, delivering monologues in an offhand, matter-of-fact fashion that Alan Bennett would kill for.  This serves to intensify the anguish of later, heart-rending speeches.  Equally powerful is Maycock’s signing counterpart, Jean St Clair.  By definition, the signers give a more expressive performance, as counterpoints to the naturalism of the speaking players.  It’s hypnotic.

Marvellous Mike Hugo is stunningly good as serial killer Ralph, convincing in his psychosis and outbursts of rage.  He and his signer Neil Fox-Roberts, have a sort of relationship, breaking the convention, interacting with each other, like a mind fractured in two, or like each other’s evil twin.

It’s a play about damaged lives and what damages them.  Lavery (and Hugo and Fox-Roberts) don’t give us a one-dimensional monster in the form of Ralph.  Neither is the mother just a mouthpiece for moral indignation.  Director Jeni Draper keeps us focussed throughout  what is largely a succession of monologues interspersed with a few scenes in which the characters interact.  Jo Paul’s set is minimalistic but versatile: one ingenious item of scenery serves as a table, a settee, a coffin and so on, allowing the action to move seamlessly from scene to scene.

An exploration of the darker side of human experience, Frozen is a gripping and absorbing piece of theatre, distressingly still relevant.  I look forward to seeing fingersmiths tackle their next piece – something comedic perhaps.  Please.