John Arden’s play from the late 1950s is not an easy one.  This ambitious production in the Ron Barber Studio makes more than a good fist of bringing it to life.  From the get-go it is obvious that production values are of a high standard.   Faye Rowse’s impressive set, making use of packing crates and chequerboard tiles, serves as all the locations of the action: pub, graveyard, town square etc, atmospherically lit by James Booth’s design.  Jen Coley’s costumes are spot on, leaving all the colour to the bright red of the soldiers’ tunics.

Director Colin Simmonds (himself a fine actor) elicits solid performances from most of his cast and moments of excellence from some of them.  Nick Tuck is chirpy Private Sparky, one of the few likable characters in the piece, nicely contrasted with the other members of the trio, Gwill Milton and Vinnie Clarke.  These three and their sergeant turn up in a Northern town and are immediately taken to be recruiting officers.  The real purpose of their visit eventually becomes apparent.  Musgrave (a powerful Mark Thompson) stages his own coup de theatre, taking drastic action in a bid to realise his own agenda: to bring an end to all war.  It’s a noble aim but the end doesn’t justify the means.  The play is startlingly relevant given this weekend’s news from the Ukraine but even without that, Musgrave’s argument still stands for British/American troops in places like Afghanistan.  The two-eyes-for-an-eye approach to quashing ‘insurgents’ will only be curtailed if we stand against those who never get hurt in these conflicts, the ruling elite, represented here by establishment figures the Mayor and the Parson.  It’s electrifyingly staged and worth the slow, uphill build-up.

Les Stringer’s Parson looks like Derek Jacobi and sounds like Richard Griffiths, in a neat character study that brings to the fore the detestable hypocrisy of the man.  Similarly effective is Edward Milton’s Mayor, a buffoonish figure keen to execute some kind of social cleansing of his town by shipping the undesirables off to the army, but to my mind, the strongest of the local characters comes in the form of pub landlady Mrs Hitchcock, superbly played by Diane Pritchard.  Barmaid Annie is also strongly depicted, with more than a hint of Ophelia’s madness, by Hannah Kelly.

The show is peppered with folk music motifs – there is some evocative playing; Tim Gardner’s discordant violin is a prime example.  The characters are prone to singing snatches of folk songs at any given moment, which sometimes breaks the naturalism of the performance, reminding us that we are there to think about what the play is about as well as what it makes us feel.

Yet again, the Crescent provides a challenging and provocative production of a difficult play, well worth an evening of anyone’s time. 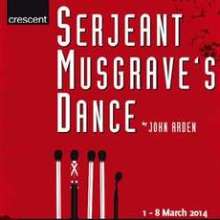