WHAT’S IN A NAME?

Adapted from the hit French play by Matthieu Delaporte and Alexandre de la Patelliere, this is a scathing comedy based on a staple of middle-class theatre: the dinner party.  Husband and wife Peter and Elizabeth are expecting Elizabeth’s brother, Vincent and his pregnant partner Anna to share a Moroccan buffet.  Completing the party is Elizabeth’s best friend, Carl, a camp trombonist.  With Vincent as a narrator, supplying both prologue and epilogue, our views of the others are very much coloured by his acidic disdain, and the scene is set for a banterful evening during which characters say the kinds of things that only close friends and siblings can say to each other behind closed doors.  We very much enjoy the barbs and pot shots, as well as the savaging of middle-class pretensions (double-barrelled surnames as a sop to equality, ridiculous forenames – Peter and Elizabeth’s offspring are saddled with ‘Gooseberry’ and ‘Apollinaire’!)

It all kicks off when Vincent (Nigel Harmon) announces his unborn son will be named Adolf.  Cue an explosive discourse about morality and freedom of expression.  Here the play touches on many of the same points as comedian Richard Herring’s show ‘Hitler Moustache’ – but this argument is only for starters.  Other revelations are to come that rock the quintet to the core.

Harmon is in excellent form as the roguish Vincent, sadistically winding people up.  Jamie Glover’s Peter, adopting the moral high ground, gets a lot of stick, as does Carl (Raymond Coulthard).  Olivia Poulet is classy as the pregnant Anna, while Sarah Hadland out-middle classes the lot with her menu and preoccupations.  Hadland delivers the show-stopping speech of the night, when Elizabeth finally blows her top, in a masterly display of temper-loss.

Each member of this tight ensemble gets their moments to shine, but it is the embittered scenes of Vincent and Peter at loggerheads that carry the biggest frissons.  Director and adaptor Jeremy Sams handles the crescendos of the arguments and the conversational pace of the discussions so that it feels we are eavesdropping on the neighbours.  We enjoy being mocked, we trendy lefties, and pride ourselves on being big enough to take it – and I’ve just made myself sick!  These people are like us, the audience, the play admonishes, and we must not let our middle-class sensibilities get in the way of what is truly important: those close relationships that are both fragile and resilient at the same time.

In the same vein as Yasmin Reza’s God of Carnage, this play delivers an endless stream of laughter through a prism of sharp social satire, expertly performed by a top-notch cast of comedic actors. 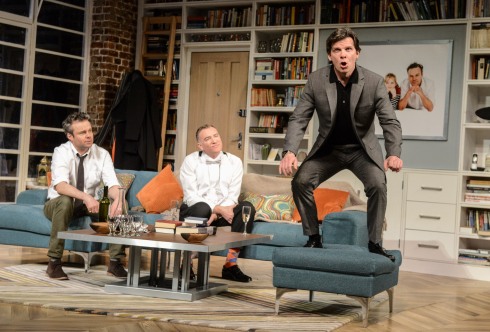