Glad Night With The Pips

“It wasn’t what I expected,” said one woman as the audience filed out at the end. No, me neither. I found my expectations surpassed by Jo Clifford’s adaptation of Charles Dickens’s novel about social climbing.

It begins, not with the famous scene in the graveyard, but with the grown-up version of protagonist Pip (Paul Nivison) entering the rather grandiose set: the interior of a grand mansion, gone to rack and ruin. At its centre is a wedding cake. Pip is revisiting the place where his change of fortunes began. Implored by Estella (Grace Rowe) he summons up memories of his youth, conjuring up characters from his past. They appear through the walls, from behind picture frames and so on, their faces ghostly white, grotesque and exaggerated, distorted by the prism of memory.

And so, in Miss Havisham’s living room, the whole story is re-enacted. Adult Pip narrates a bit, but mostly stands by and watches. Young Pip (Taylor Jay-Davies in an engaging performance) suffers cruelty at the hands of his sister (a deliciously monstrous Isabelle Joss in a characterisation that would be at home in a Roald Dahl) and has his emotions toyed with by the haughty Estella. I needn’t summarise the plot, I feel, because the book is so well-known, and of course any adaptation will truncate or omit some events and characters.

This one is a delightfully gothic affair. A lot of money has been lavished on the decaying grandeur of Robin People’s magnificent set and the striking, almost circus-like costumes by Annie Gosney and Graham McLaren. Mr Wopsle sports a top hat that adds almost another yard to his height. The soldiers who recapture escaped convict Magwitch wear expressionless masks, dehumanising them. There is more than a little of the Tim Burton to the aesthetic. Nathan Guy struts and poses on the mantelpiece as Herbert Pocket, a colourful mixture of the Joker and the Penguin by way of the Mad Hatter. Everyone in Pip’s past is bedecked with cobwebs. The action and atmosphere are supported by an eerie, almost horror-movie score by Simon Slater.

The dazzling designs are more than matched by the quality of the performances. Jack Ellis certainly has the moves like Jaggers (sorry) and the marvellous Paula Wilcox is brittle and imperious as celebrate eccentric Miss Havisham, swanning around in her wedding dress. When she re-enacts the moment she heard she was jilted on her wedding day, Wilcox emits a heart-rending cry. This is melodrama but you can’t help being touched and chilled by it.

As convict Magwitch, Christopher Ellison (off of The Bill) storms it. With thankless dialogue that requires him to swap his Vs for Ws he portrays the wretched warmint wery well, imbuing the character with dignity and pathos. Ellison has never been better.

Director Graham McLaren uses the conventions of narrative and emblematic theatre to tell the classic story in a new way, making it fresh without messing about with the plot or the themes. Dickens would be heartened to find we are more civilised these days. We no longer send children (or anyone else) to the gallows. But he would share my dismay that the iniquities of society persist. The arrogance of the materially well-off (but poor in terms of humanity and compassion) is all too visible every time a government minister appears on the telly. 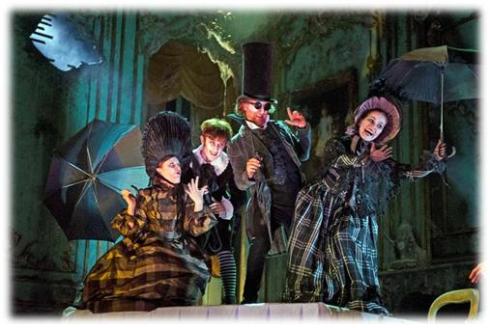