The Gilbert and Sullivan Opera Company’s second offering at the Grand this week is a tale of fairies – while Shakespeare mixed these supernatural creatures with the court of Theseus, Gilbert and Sullivan pit theirs against the House of Lords, providing the opportunity for direct satire – still funny today and still applicable, which goes to show how the institution has failed to change.

Director Simon Butteriss keeps an authentic late Victorian look and feel to the production, giving a star turn himself as the sprightly and slightly lecherous Lord Chancellor.  He heads a strong company – this time, I think the chorus numbers come across best. The Lords – so ridiculously self-important they sing their own fanfares (taran-tara!) – look fantastic; Tony Brett’s costume design gives them colourful cloaks, which they work to humorous effect, thanks to Stewart Nicholls’s choreography.  It’s funny, charming stuff from start to finish and Arthur Sullivan’s score is realised to beautiful effect by conductor David Steadman and a splendid orchestra.  In the second act there is a perfectly Mozartian quartet that is just sublime.

In the performance I saw a strong Charlotte Pearson stood in as the eponymous fairy, exiled because of her marriage to a mortal.  The excellent Sylvia Clarke makes a solid Queen of the Fairies, bringing out the grandeur and the comedy of the role.  Claire Lees sings beautifully as Phyllis the girl every man wants; her paramour Strephon (half-fairy, mortal from the waist down) is played by handsome Simon Pontin, although his voice does get a little drowned out in the duets.

It’s an entertaining piece, combining whimsy with political satire and oh-so-terribl English.  It all ends happily when the main contention of the plot is resolved on a quibble – the gossamer thinness of the story is like a fairy wing in itself. But that’s part of the fun of it.

I can’t wait to go back for the third and final production in what us shaping up to be a thoroughly enjoyable week in Wolverhampton. 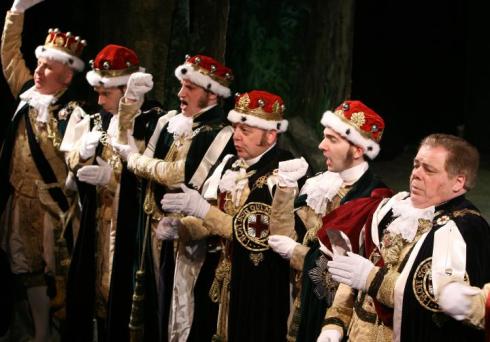