IMPERIUM Parts One and Two

Dramatist Mike Poulton took it upon himself to adapt Robert Harris’s Cicero trilogy for the stage, condensing the action into two evenings.  In six one-hour chunks, we rattle through the rise and fall of Julius Caesar, along with many other characters, while our main man Cicero (Richard McCabe) weathers every storm.  It’s like binge-watching a TV series.

For the most part, the action is narrated by Tiro, Cicero’s faithful slave/secretary (an agreeable Joseph Kloska) while McCabe’s Cicero comes across as a blend of Zero Mostel and Ian Hislop.  There is plenty of humour here, irony and barbed remarks and, inevitably, parallels with the modern world abound.  “Stupid people tend to vote for stupid people,” Cicero observes, pithily explaining our current government.  The phrase, “The will of the people” is bandied around as though it excuses everything.

Peter de Jersey is a volatile Caesar, friendly and menacing – often at the same time, while David Nicolle is a suitably weasely Crassus and Michael Grady-Hall a ranting Cato.  Oliver Johnstone’s Rufus gets his moment to shine in a court scene, while Pierro Niel-Mee is roguishly appealing as the naughty Clodius.  It’s not just Cicero who has the gift of oratory, it turns out.

The precarious, perilous nature of political life in ancient Rome is an ever-present menace and there are moments of ritualised action that heighten the differences between our culture and theirs, while the motives and behaviours of the characters reinforce the notion that human nature doesn’t change and politicians are some of the worst people.

The action is played out on an all-purpose set, designed by Anthony Ward: a flight of wide steps leads to a mosaic backdrop – a huge pair of eyes watches all.  Above, a large sphere is suspended, onto which projections and colours are cast to complement the action.  Yvonne Milnes’s costumes immerse us in the period while the lowering of the stage to floor level sort of democratises the plays: as observers, we are often addressed directly as members of the Senate.

Part Two sees the assassination of Julius Caesar (spoiler, sorry!) and the resulting fall-out.  The conspirators bump him off with no strategy in place for a new regime.  Et tu, Brexit?

Oliver Johnstone reappears, this time as Caesar’s successor, Octavian, youthful but determined.  When he coldly asserts, “I am a god” it’s a chilling moment, and we glimpse the kind of emperor he will become.  Pierro Niel-Mee is back as a serious Agrippa, a perfect contrast to his Clodius from Part One.  In this performance, Nicholas Boulton is excellent as roaring drunk Mark Antony, a hothead impotent to prevent the rise of cold Octavian.   Siobhan Redmond has an effective and amusing cameo as Brutus’s mother (bringing to mind the Life of Brian’s Biggus Dickus who ‘wanks as high as any in Wome’).

Once you get used to the host of characters coming and going, this is a hugely enjoyable watch, funny, thrilling and sometimes shocking.  On the one hand it makes me glad that politicians of today, bad as they may be, don’t go around burning each other’s houses down or lopping each other’s heads off.  On the other, it makes me wish they would.

It has become usual practice for the RSC to broadcast to cinemas its productions in the main house and then sell them on DVD for home viewing.  Productions in the Swan are not preserved in this way, which in a lot of instances is a great shame.  All that will remain of a good production will be what Cicero claims is left of any good man: what is written down. 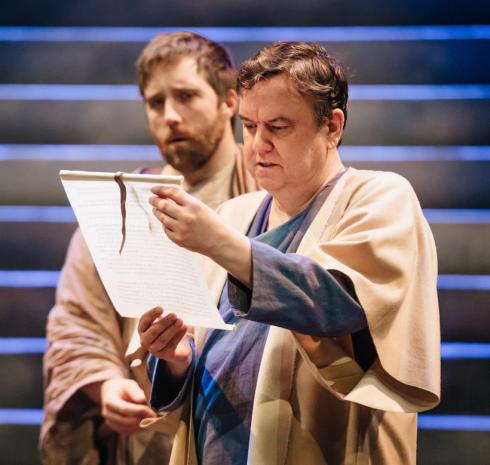