Almost thirty years old, Alan Ayckbourn’s vision of a dystopian near-future is still bang on the money.  In some ways, technology has almost caught up with the world of the play, with touchscreen tablets and face-time video messaging, and our fascination with robots continues to this day in TV shows like Humans and WestWorld.  (Not forgetting, of course, that we owe the word ‘robot’ to a 1920 play by Karel Čapek).  Science fiction not only predicts future tech but also warns us about it.  Here, the technology, not so different from our own, is recognisably frustrating with its glitches and flaws.  Meanwhile, the world outside is becoming increasingly violent, with thugs ruling the streets.  With homophobic and racist attacks on the rise today, this nightmarish world doesn’t seem too far-fetched in post-Brexit Britain.

Composer Julian, unable to work since his wife departed with their daughter, hires actress Zoe to masquerade as a life partner.  The aim is to convince both wife and an official that Julian is able to provide suitable care for his daughter and thereby gain access to his child.  When the actress doesn’t work out, Julian has to rethink his plan, adapting an android to play the role… And so the scene is set for some wonderfully farcical shenanigans and, due to the genius of Ayckbourn’s writing, some heartfelt emotional outpourings.

Bill Champion’s Julian is a broken man, who awakes from his reclusiveness through his meeting with Laura Matthews’s effervescent and ditzy Zoe.  That he gets what he wants – the composition of new music – but in doing so, loses everything, is genuinely tragic.  Matthews is an irresistibly lively presence and equally compelling in the second act when she plays the remodelled robot – played in the first act by Jacqueline King, who elicits both chuckles and chills as the wonky automated nanny.  King later appears as Julian’s estranged wife – the play is an excellent showcase for female talent.  Daughter Geain (Jessie Hart) also displays a duality – the play touches on gender roles and social conditioning.  Like the robot, we are programmed to behave and respond in certain ways.   There is also some excellent character work from Russell Dixon as wet-lettuce official Mervyn, and Ayckbourn, with his director’s hat on, orchestrates the comedy, the dramatic irony and the tension like a master.  Which, of course, he is.

It’s a play about how technology dehumanises us, getting in the way of our interactions, blocking rather than liberating our communications. 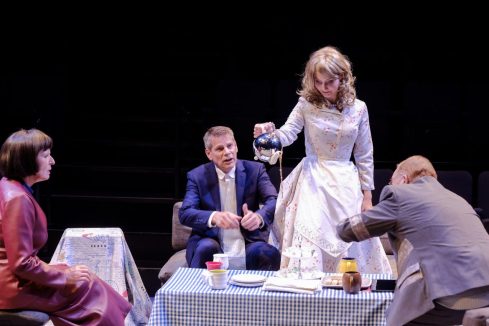