AN AMERICAN IN PARIS

At long last, I get to see the hit show people have been raving about.  The contrarian in me expects to hate what everyone else enjoys but no, it really is at least as good as I’ve heard.

A new show, based on the 1951 Oscar-winning film, this is much more than a jukebox musical of Gershwin hits.  Set in post-war, post-Occupation Paris, it’s the story of Jerry, former soldier, now starving artist.  A chance encounter teams him up with another American, Adam, a composer whose music is just like Gershwin’s!  Third Musketeer in this group is Henri, a native Parisian who is hiding a dark secret from his stuffy parents (SPOILER: he’s a – gasp – a song-and-dance man!).  Jerry and Adam get work with a ballet company, where Jerry finally meets the fugacious Lise, a young ballerina with a fantastic haircut and even better dance moves.  Each of the three lads forms an attachment to Lise and drama ensues.  Jerry becomes a sort of part-time gigolo for wealthy benefactor Milo (relax, it’s a woman) which doesn’t exactly keep him in Lise’s good books.  This being a Hollywood version of reality, everything comes good at the end, via a series of eye-popping musical numbers.

As ever with musical theatre when they’re doing a show-within-a-show, I wonder why they bother.  They only need to go out onto the street and everyone will readily join in, subjugating their own lives and free will to participate in whatever moment the main characters need to express through song and dance.  In this Hollywood world, everyone is trained and proficient in the performing arts!

In Ashley Day as Jerry we have the perfect leading man, gliding, leaping, twirling and kicking his way through the story.  Day is an excellent singer too and can also meet the acting requirements of the role, the effortless comedy, the emotional points; Day’s Jerry is cheeky, cocky, charming and funny, served with just the right amount of cheese.  But before this review turns into a love letter to Ashley Day, I must remember there are other people in the show.

David Seadon-Young’s Adam is our contact with this rarefied world, narrating prologue and epilogue.  Seadon-Young is a warm and appealing presence but we know all along he’s not going to get the girl.  We know how these things work.  Haydn Oakley amuses as Henri, bumbling his way through a routine that can’t live up to the Hollywood production number in his head (we get to see both!).  Leanne Cope is a tiny mega-star as Lise, the gamin role, darting around one minute, and then gliding through the air as though it were water, the next.  Lise is a figure of mystery – why is she so resistant to Jerry’s relentless advances? – torn between duty and her true feelings, and Cope brings depth to the part so Lise is more than the object of men’s affections, desire or what-have-you.  Also strong is Zoe Rainey as brassy rich lady, Milo Davenport, with a belting voice as clear as a bell.  There is enjoyable support from Julie Legrand as Henri’s mother, and Julian Forsyth as his dad.

A massive ensemble populates this Paris, keeping the stage busy and giving weight to the big numbers.  They are a joy to behold, dancing in synch, in a range of colourful costumes.  Designer Bob Crowley is not shy of using stereotypes (berets and striped jumpers, for example) as shorthand, and his ever-moving set combines practical pieces with projections to give us impressions of a war-damaged city as seen through Jerry’s sketchbook.

Stephen Ridley conducts a fantastic orchestra, filling the auditorium with Gershwin’s energising, life-giving jazz, yet another element of perfection in this fabulous, glorious show.  Director Christopher Wheeldon also choreographs with vibrancy and plenty of period touches, while Craig Lucas’s book, which contains a couple of ‘shits’ and ‘Christs’ keep us in touch with the darker reality underpinning this balletic world.

The show works superbly well as a piece of escapism; it’s great to get away from the world of Tory sleaze, mass shootings and all the rest of it – but I think it’s doing the show a disservice to count it purely as escapism.  There is, to me, a clear message coming through.  This Paris is broken, seeking to rebuild itself and for that, the people need to keep their spirits up.  When the Brexit insanity and this rotten government have finally finished bringing this country down, we are going to need to keep our spirits up too.  This production reminds us to make time for singing and dancing in our lives.  We need joy to help us through hardship. 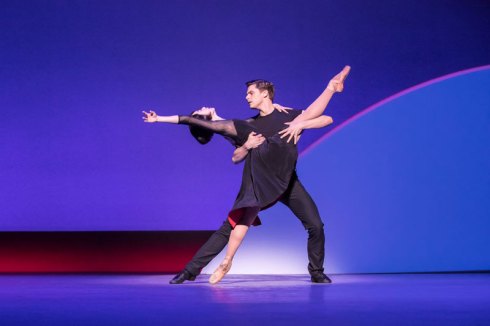 Ashley Day getting to grips with his co-star, Leanne Cope (Photo: Alastair Muir)

THE SMALLEST SHOW ON EARTH

It is commonplace these days to adapt popular films for the stage, often as musicals. Here the 1957 Ealing Comedy (which starred Peter Sellars and Margaret Rutherford) gets the jukebox musical treatment but all the songs are written by the great Irving Berlin. Standards like Blue Skies and What’ll I Do flesh out the action of this utterly charming period piece.

Struggling screenwriter Matthew Spencer (Haydn Oakley) inherits a cinema in a provincial town. The place is on its uppers, thanks to the underhand tricks of the owners of rival cinema, the Grand. Spencer and his wife Jean (Laura Pitt-Pulford) plan to tart up their picture house in order to get a better offer from the rivals, Albert and Ethel Hardcastle. But the Spencers soon find themselves emotionally attached to the old place and the Hardcastles have a fight on their hands.

It’s all good, clean fun, steeped in the sepia tones of nostalgia and brought to life by a likeable and energetic ensemble. Haydn Oakley is a rich-throated crooner but the superb Laura Pitt-Pulford steals the limelight – her solos are showstoppers and a treat for the ears. Matthew Crowe is delightful as camp solicitor-turned-drag-artiste Robin Carter and Ricky Butt is suitably booable as the snooty and conniving Ethel. Sam O’Rourke’s naïve Tom, a walking encyclopedia of cinematic trivia and the Hardcastles’ lovely daughter Marlene (Christina Bennington) bring the house down with Steppin’ Out With My Baby, in which Lee Proud’s choreography brings to mind the wonderful Gene Kelly.

Director Thom Southerland captures the innocence of the era, delivering a feel-good piece that’s all warm and cosy like slipping into a warm bath.  It’s sweet, funny and charming, an unadulterated delight.  And there’s nothing wrong with that for a great night out at the theatre. You may also read more into it, if you’re that way inclined. The piece reeks of ‘British values’ in the best possible sense: fair play and rooting for the underdog, decency, loyalty and pulling together in the face of underhand tactics and dirty tricks.  The villains of the piece are those who seek to make profits by whatever means they deem necessary – and that’s something worth keeping in mind in these days under a government inebriated by the will to privatise everything they can get their mitts on.