This latest production from Gritty Theatre is the brand-new piece from Michael Southan, and it’s quite a departure from his earlier play, Fred & Ginger but no less enjoyable.  It’s a kind of play-within-a-play, with three cast members walking on, carrying cardboard boxes to add to those already on stage.  They announce they’re going to do a spot of pub theatre and tell us a story called Hoppers and it’s football-related – Hoppers are ‘groundhoppers’, fans who try to attend matches at a number of stadiums throughout the season.  That’s what I gather, anyway; I could be mistaken.

And so, there’s plenty of fourth-wall breaking as the three narrate, often speaking in verse like a scaled-down Greek chorus, using their physicality and versatility to set the scene.  They recruit a plant (well, a woman) from the audience to be the protagonist.  This is Sal (played by Michelle Jennings) a foul-mouthed barmaid whose father has just died, thus triggering a quest.  The retrieval of a missing away kit drives the plot, as Sal goes from pillar to post, and club to club, meeting oddball characters and meeting their demands so she can track down the precious relic and complete her late father’s collection.  Jennings does a good line in exasperation as the beleaguered barmaid; Sally learns there was more to her dad than she ever knew.

Appearing as her father, as well as a host of other characters including boring Tony off the radio, is the rather protean Conor Nolan, whom I cannot fault.  Equally committed are Amy Anderson and Danny Milwain (who seems to be constantly snacking on something, whatever role he’s playing, including at one point an entire cucumber.  You don’t see that every day.)  Director Dominic Thompson gives them plenty of business which they pull off with precision and skill.  The presentation is sharp, slick and sassy, reminding me of early work by Godber with the added four-letter words of Berkoff, and while there is some lovely writing here, the form tends to overshadow the content at times.

There is much to enjoy here: a slow-motion skittles event, for example, and some perfectly timed reactions.  The local accents (instant comedy!) and local references strike home, even if in my ignorance I don’t appreciate the whole non-league football theme.

As items are unpacked from the ever-present boxes, Sal learns and we learn that there is more to our parents than their role as our parents – they are people too, with ambitions, interests and histories we would do well to learn about while there’s time.

Funny, with its heart and its theatricality on the sleeves of its football strip, Hoppers is both simple and sophisticated, almost mythic in its storytelling, and entertainingly enacted by an energetic ensemble. 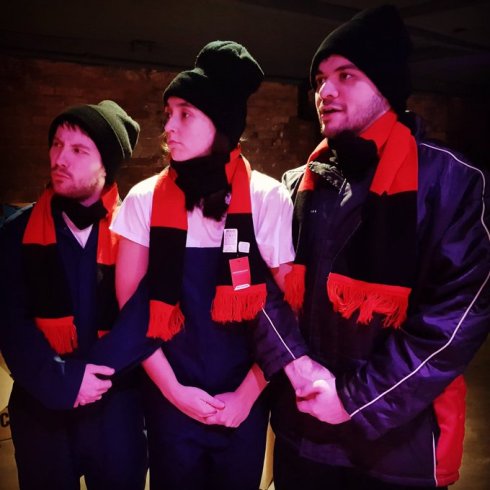 Looking Back in Anger

Mark is a 19-year-old with a temper – to put it mildly – in this production by Gritty Theatre of Jane Upton’s one-hander.  As the story unfolds, we learn of his situation and his past.  He’s unemployed, blowing his money on blow-outs from McDonalds and blow jobs from spotty prostitutes, his only respite from a living hell with his drug-abusing mother and the unfortunate baby sister at whom he directs his anger and frustration.  He plans to kill the child, just to get some peace but, the more we learn about him, the more we realise he won’t go through with it.  Will he?

He relives memories of happier times: a seaside holiday with Mum and Grandad – until the spectre of drug abuse ruins everything.

All in all, it’s a grim tale, ameliorated only by glimpses of humour, but a raw, fearless and intense performance by Dominic Thompson, who not only narrates the story but inhabits it, keeps us entranced.  Director Ian Robert Moule has Thompson utilise pub props and pub furniture to represent what’s going on in the account: and so, a spillage of lager becomes the young Mark’s pissed trousers; his hoodie becomes the prostitute; a toppled stool becomes the incapacitated mother the little boy desperately tries to dress… It’s inventive stuff and highly evocative but, of course, the power of the production comes through Thompson’s volatile presence.  Mark is quick to boil over into fury.  It’s not so much a short fuse as no fuse at all, and while there are quieter moments and even calmer moments, perhaps Mark could do with more time to simmer.  He seems to go instantly to 11, as though a switch is being flicked.  Thompson maintains the energy and intensity of his portrayal and is never short of compelling and credible in what is a bravura performance.

The material is gritty – as we might expect! – and we do feel for Mark, who has had to deal with matters no child should ever encounter.  The play finishes on a life-changing shock, a culmination of horribleness, that leaves us with a nasty aftertaste.  Upton shows us a dark side of society without offering a way-out, or a suggestion of how things could improve, and so Bones is ultimately bleak.  But the powerful presentation gives us something to admire in this gruelling, gruesome tale.

AN EVENING OF SEX

A small but discerning audience gathers on a chilly afternoon in a converted factory building in Birmingham’s Jewellery Quarter.  On offer is ‘An Evening of Sex’ but before we can get too excited, the programme notes reveal that the three short plays we are about to see are united by one factor: the characters do not have sex.  Frankly, I’m relieved.

First up is a one-hander, so to speak, written and directed by Dominic Thompson and performed by Jack McBride.  Martin wakes up hungover and handcuffed to a toilet.  It’s his first wedding anniversary and he’s missed a lot of voicemail from his Mrs.  He’s due to fly with her to Dublin and time is running out.  McBride holds our attention well – as the bottom falls out of Martin’s world, and the arse hangs out of his trousers.  There is some neat physical comedy here as Martin drops his phone into the bowl and has to fish it out again, using a sock as a glove, and McBride swaps in and out of the character of a cleaning woman with clarity and ease.  This is a natty piece of writing from Thompson, fresh and contemporary.  We never learn why Martin’s so-called mate has done this to him, but that’s a minor point.

Next up: a two-hander that charts the relationship between schoolfriends, Carl and Izzy.  We meet them at rehearsals for their annual school production, in a sort of Neil Simon Same Time, Next Year kind of way.  In four scenes, we see them grow up before our very eyes, from immature kids eating sweets and playing with Matchbox cars, to young adults, catching up with each other, both having their own lives.  Tilly Farell-Whitehouse undergoes quite a transformation in terms of look and attitude as the earnest, sweet-natured Izzy, quoting her mom and gran as the ultimate authorities on just about everything.  Dominic Thompson is equally credible as the wayward Carl, for whom school is not the best place.  Writer Michael Southan leaves it to us to fill in the gaps between the scenes, keeping the exposition of each scene to the minimum, and this works very well.  It’s sweetly played, and nicely paced by director Ian Robert Moule.  One of the mission statements of Gritty Theatre is to put West Midlands voices, West Midlands stories on the stage.  One of the advantages of the local accent is it readily lends bathos to any statement, a gift for any comedy: witness Izzy’s line, “That last chorus of Fame shredded my larynx.”  It would be interesting to see how the accent plays in the metropolis.

Painting a Picture for the World

Third and last, we have another two-hander, written by Dave Pitt.  The setting is the neat but sparse boudoir of one of your higher-class prostitutes.  Kitty (Jessica Melia) admits her latest ‘trick’, Mark (Damien Dickens), a nervous fellow who just wants ‘to talk’.  And so begins an exchange of observations rather than bodily fluids, the upshot of which is that money can’t buy you love.  Well, we could have told him that from the start.  The play does provide something of a window into the world of the working girl but comes across as an interview rather than a conversation.  Melia cuts a sympathetic figure and Dickens gets Mark’s awkwardness across, but we know he’s going to go away unsatisfied.  The tart with a heart pecks him on the cheek ‘for free’ and he shuffles out.  The session peters out and the play ends.  Nicely played but with no real pay-off.

All-in-all, a fresh and delightful afternoon of brand-new writing.  Perhaps Gritty Theatre have played it safe this time around but I look forward to seeing more of their work.

Gritty Theatre bring their production of Tom Wells’s 2009 piece to Birmingham’s Crescent Theatre en route to the Edinburgh Festival Fringe.  A one-hander performed by newcomer Clement Charles, this is the story of Nick, a 17-year-old Goth, who is gay and who volunteers at a local old people’s home.  Dressed like a kind of vampire undertaker, a cross between Marilyn Manson and Noel Fielding, Nick is instantly appealing – it’s his camp bitchiness (or bitchy campness) that gets us laughing along with him from the off.  His performance is a one-hander in a different sense when he confides that he has to abandon a masturbation session because of his fear of staining his black duvet cover.  Nick narrates key scenes from his life, including his visits to old man Rod at the home.  He (Nick) is bright and witty, scathing and sensitive – exactly the kind of character I would have found alluring when I was that age, all those centuries ago.

Director Ian Moule doesn’t let Nick keep still for a minute, eliciting an energetic and engaging performance from the likeable and talented Charles.  During his anecdotes, Nick gradually strips away his gothic accoutrements, sloughing them off one at a time – and it’s all in keeping with the action: his socks become galloping hooves in one of his mum and dad’s historical reenactments, for example – the piecemeal degothification adds to Charles’s electrifying portrayal, as Nick eventually goes the full monty – in the best possible taste!   No detail is overlooked, from the black toenail polish to the seemingly throwaway characterisations of the others who populate Nick’s life.  Wells’s witty script is given insightful treatment – a balloon is put to symbolic use and the baring of Nick’s body, along with his story and his soul, elevates this coming-out story to something more universal: it’s about becoming aware of one’s own identity, of discovering who you are beneath the labels we and others place on ourselves.  At the end, Nick stands before us, without a stitch or a smear of makeup.  He doesn’t need to say, “Here I am”.

Clement Charles is thoroughly captivating, his delivery immaculate and exceedingly funny.  He’s also a great little mover if his cavorting to the Sugababes and Britney is anything to go by.  It’s an assured performance that rings true.

This is a satisfying and entertaining hour or so, that stirs memories of one’s own troubled teenage years (is there another kind?) reminding us that Goths, teenagers and even the elderly are humans too.