IN PRAISE OF FOLLY

Based on the comic opera Cosi fan tutte by Mozart and Da Ponte, this fresh little farce from the Foppish Theatre Company is vibrant with wit.  The script by Dewi Johnson (who also directs) and Andrew Buzzeo (who also appears as ‘Alistair’) adheres to Da Ponte’s libretto after an establishing scene in which soldier buddies, William and Benjamin, accept a bet from their cynical, worldly chum Alistair, who claims that within a day he can make the soldiers’ girlfriends turn to infidelity…  This scene, performed between the three, on the apron with nothing more than a simple bench, shows how direction can keep things engaging by eliciting energetic performances from the actors.

As Alistair, Andrew Buzzeo is hugely enjoyable, a sardonic manipulator and social commentator.  Equally entertaining are Luke Grant’s Benjamin and Zach Powell’s William, posing and posturing in ridiculous disguises (oh, those moustaches!) and flailing around from the effects of poison; Powell provides a superb study in comic playing when Alistair’s scheming bites William in the backside.

As the unwitting participants, the girls, Zoe Birkbeck is a haughty and bookish Fiona, never less than elegant, while Tessa Bonham Jones’s Charlotte is delightfully dim and frivolous.  As Phoebe, the conniving maid, Georgina Morton gives an arch but down-to-earth performance; her appearance as a notary, with a beard as long as she is tall, is ludicrously funny.

Johnson and Buzzeo’s script crackles with witty lines, and the dialogue has an authentic sound, with only the occasionally anachronistic turn of phrase to remind us that this is a modern-day pastiche and not a long-existing text.  I even recognise some lines as direct translations from Da Ponte’s original; well, if it ain’t broke…

The set, by Ludwig Meslet Poppins, consists of white cloth, creating flats and wings, like the ghost of an 18th century stage.  It’s a blank backdrop against which the colourful characters play out the farce, allowing the actors to come to the fore.  Rosemarie Johnson’s costumes are bright, evoking the period setting, and adding to the elegance of the enterprise.

It’s fast-moving and funny, and irresistible in its appeal.  Johnson’s direction is sharp, like a cut diamond  The sexual mores on display may remind us of the distance between the past and our present, but the machinations of the plot, played here to perfection, show that ‘old-fashioned’ conventions can come across as a refreshing and, above all, entertaining alternative to the pervasive naturalism of the modern-day stage and screen. 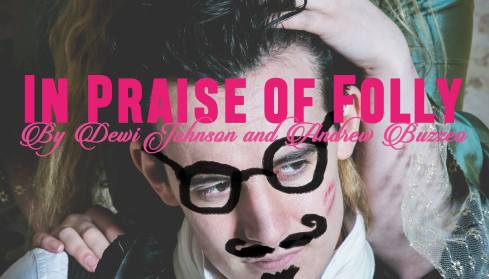