Frantic Assembly have revived their acclaimed production of Othello for a tour and though it lacks the charm of a show by Propeller, say, it certainly goes a long way to make Shakespeare accessible and appealing to a young, contemporary audience.

The setting is the Cyprus pub and its environs.  It’s a grubby establishment where you’re just as likely to get a kick in the teeth as a pint of beer.  The patrons sport hooded tops and tracksuits and speak with Northern accents.  It’s like a blank verse episode of Shameless.

The script has been cut to about half of its usual length, stripping the plot to a minimum and keeping the action tightly focussed.  What gets lost is the sense of Othello as a great man.  Here he is thug-in-chief, wielding a baseball bat.  He might be the hardest man in a milieu of hard men but, when all’s said and done, he’s just king of a shit heap.  He hasn’t got far to fall.

Mark Ebuwe is a solid, aggressive Othello but it’s Steven Miller’s Iago who compels, a nasty piece of work.  Miller brings out Iago’s cruelly ironic humour.  Like Cassius in another play entirely, he has a lean and hungry look.  You wouldn’t want to meet him in broad daylight never mind a dark alley.  Richard James-Neale brings a touch of light relief as the bumbling Rodrigo, while Ryan Fletcher’s Cassio gives us a striking study in drunk-acting.  Leila Crerar’s Emilia rises above the general chavviness for a climactic scene of high emotion and horrific violence – director Scott Graham doesn’t stint on the brawling and savagery.  The strangling scene is shocking but almost balletic.  Indeed, there is a lot of gracefulness in this sordid, unwholesome world.  Scenes are broken up by movement sequences in which the physicality of the actors complements the heightened language of the text.  It’s a slick but sometimes uneasy watch, tightly performed by an energetic and committed company.

This treatment ennobles the characters somewhat but what we get is not a sense of inescapable tragedy in which a great man is nobbled by a fatal flaw in his nature but instead we get social commentary: There is no escape from this nasty, dangerous existence and these people don’t even aspire to lift themselves out of the mire.  And that’s a tragedy of a different kind. 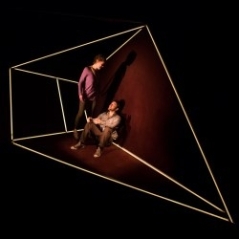 Bryony Lavery’s rather lyrical story of amateur boxing is brought to invigorating life by Frantic Assembly in this new production, doing the rounds (Doing the rounds! Hah! …suit yourselves). Loud music boxes your ears, bright lights assault your eyes, but what is most stunning is the slick, choreographed moves of this tight cast of six. These movements all stem from boxing and the exercises from training in preparation for boxing – the physical fitness of the actors is incredible; they bring a grace and an insistent intensity to the proceedings.

This is the story of shoplifter and car-borrower Cameron who is reformed by becoming a member of the amateur club run by Bobby Burgess (Keith Fleming as a sort of avuncular sergeant major). There, Cameron meets showboat Ajay The Cobra Chopra (Taqi Nazeer), walking Wikipedia Ainsley (Ali Craig), hothead Neil Neill (Matthew Trevannion) and hardnosed female boxer Dina (Margaret Ann Bain). Cameron ducks and weaves his way into the group and soon Burgess is selecting suitable candidates to turn pro.

This gives rise to concern in Cameron’s mother, in a excellent comic turn from Julie Wilson Nimmo. Her relief over her boy finally getting some structure and discipline in his life is replaced by justifiable fear that he will sustain some serious injury. The play’s title tells us tragedy is coming…

Cameron doesn’t quite make it from rags to riches. Stuart Ryan stands out as the young contender who tries to better himself. Not so much flawed as floored.

Technically, the show is dazzling. The music and lights are secondary to the performances of the actors. Directors Scott Graham and Steven Hoggett use freeze frames and thought tracking to eye-opening effect. Slow motion and a revolving stage add a Matrix-like air to the fight sequences – we are not meant to get caught up in the violence of the match; this is character-led drama and because of this handling, the ending leaves us all the more punch drunk.

A vibrant, slick and tight production. A knockout.