Serbian playwright Neriad Prokic’s first work in 25 years is presented here by Birmingham’s own Stan’s Cafe – the company he challenged to stage The Anatomy of Melancholy a while back (which they did, with aplomb!). Here, theatrically at least, the scale is much smaller although the subject matter deals with the fate of the world. Among intricate set-ups of thousands of dominoes, the four performers deliver scenes, out of chronological order, in which the main players (or suspects) who brought about World War I are shown, conspiring and colluding: among them is Franz Ferdinand whose fate, we know, is sealed. Our guides through this historical essay are two unnamed figures, a kind of Vladimir and Estragon pair or a Yin and Yang. One is pessimistic and pragmatic, the other optimistic and idealistic. It’s interesting if wordy and – probably necessarily so, because of the dominoes that surround them! – rather static. The dominoes and the setter-upper who crawls her way around the floor, adding yet more to the ranks, provide the tension. We know they are going to topple but we don’t know when… And there is the ever-present danger that they might get knocked, trodden on or triggered at the wrong moment.

When they do go, their rattle and slap as they hit the floor is chilling and the devastation almost total. (Perhaps it was meant to be total, I don’t know!) It’s the play’s big theatrical idea.

The play’s other big idea is that the circumstances that led to WWI are being set-up again, like a row of dominoes. The unnamed commentators bring us up to the present day and here, unfortunately, the play becomes more of a lecture. There is nothing we can do, concludes the grumpy one.

The performers: Gerard Bell, Gareth Nicholls, Graeme Rose and Jack Trow deliver Prokic’s words clearly and with conviction, but on the whole the piece is too dry and too bleak for me. The title gives the impression the piece is more dynamic than it is. I felt like I wanted to be stirred into action but I wasn’t. By the end, I was ready to topple like a double blank.

The play is the first half in a double bill to open the REP’s BE Festival. The second play, Next Door, is reviewed separately. 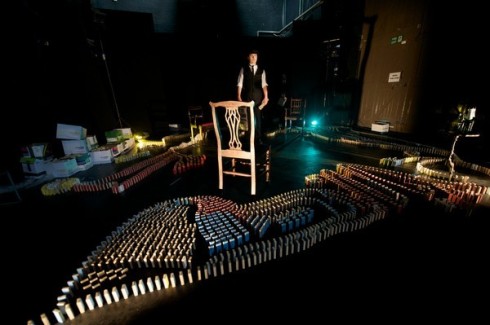