Rossini’s final opera is a more serious affair than his other works, like The Barber of Seville or The Journey to Rheims. Famous of course for its overture, this is the story of Swiss hero Tell who stands against the Austrian oppressors and shoots an apple of his boy’s bonce.

That overture: it begins (in its full version; Rossini made not just a meal but a banquet of his overtures) with a cello solo. The cellist appears on stage in a spotlight, does her bit and then is frogmarched away by Austrian soldiers! Then there is a sequence depicting a storm – all done musically; you don’t need stage effects when the music’s this descriptive. There’s a lilting fanfare to herald the morning, the calm after the storm, before we gallop off in the most famous, Lone Ranger section. Is there a piece of music more exhilarating than this? Under Carlo Rizzi’s baton, or riding crop, the WNO orchestra attack it at a fair lick. It is thrilling, rousing and played with pinpoint precision. I wonder if the evening has peaked too early.  (You can hear the full version of the overture here)

Raimund Bauer’s set is minimalistic: there are hints of an Alpine landscape projected on screens. Space is needed to accommodate the large chorus – in their scenes, Marie-Jeanne Lecca’s costume designs dominate. The masses are dressed as early factory workers or labourers, all dowdy in several shades of grey (not quite fifty) but the overall effect makes for a very restricted palette. This is at odds with the wonderful colours in Rossini’s score. It makes for a production that is beautiful to hear but rather drab to see. As always the WNO chorus sounds divine.

The principals are all strong. In the title role, David Kempster in a long overcoat and white hoodie, looks and sounds impressive enough to rally the Swiss out of oppression. Leah-Marian Jones as Mrs Tell and Camilla Roberts as Mathilde fill their arias with emotion; the latter especially has a voice rich with melancholy. Fflur Wyn is son Jemmy, the apple of Tell’s eye, capturing the boy’s indomitable spirit – he represents the new Switzerland that will rise once the Austrian oppressors are chucked out. Barry Banks works the hardest in the demanding tenor role of Arnold – his voice soars and blares, like the horns that pepper the score. Baddie Gesler Clive Bayley, bald as a Bond villain and wheeling around like Davros, gets the boos his character deserves.

There is humour – a good deal of it from Amir Hosseinpour’s quirky choreography – and many sweepingly emotional passages. The apple-on-the-head scene, beautifully dramatized by Rossini, is cleverly staged by director David Pountney. Alas, other moments (the climactic shooting of Gesler, for example) do not come across so effectively. Sometimes the characters stand on what looks like a giant sunbed – I assume it represents a snow-capped peak – at others, the imagery is striking and powerful: the Swiss have black plus signs (like the cross on their flag) sewn to their clothing, and are herded around by the Austrian stormtroopers. It’s yellow stars and SS guards all over again. The Austrians have a fetish for wearing antlered helmets. They bray over the spoils of their hunt at some kind of stag do – and its more than hinted at they’ve been hunting people not animals.

You don’t have to watch the news for long to see stories of countries occupying other countries. Here the locals in rebellion are the heroes, which is not always how they are portrayed by the media; this production reminds us there is another side to those reports.

A feast for the ears, visually this production is patchy with its successes. A rare treat to hear this challenging Rossini performed live. 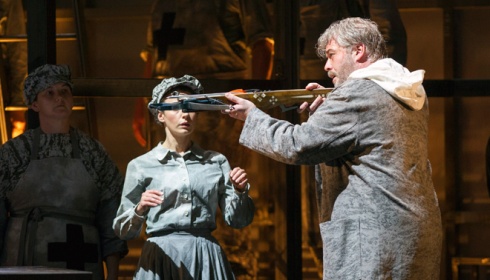 Who ordered the Strongbow? David Kempster in a Tell-ing performance.