Where There’s A Will…

THE CAT AND THE CANARY

The Classic Thriller Company is back on the road with this new version of the creaky old play by John Willard from 1922, with an adapted script by Kneehigh’s Carl Grose.  Grose moves the action forward to post-WW2, post-independence of India.  The language has been juiced up to include words like ‘bugger’ and ‘shit’—while I suppose people used such vocabulary back in the day in the real world, it seems at odds in the cosy period piece milieu of the stage thriller.

The premise is delicious.  A lonely mansion on a moor on a stormy night, a group of people gathering for the reading of a will, an escaped lunatic on the prowl…

Leading the troupe is international star Britt Ekland, playing against type as dowdy housekeeper, Mrs Pleasant.  Ekland is marvellous, at times creepy, at others funny—much like the play as a whole, in fact.  She is joined by a strong cast, including Marti Webb as a strait-laced matronly type who loosens up when she gives up being teetotal; Gary Webster as the brash jack-the-lad boxer Harry; Ben Nealon as Charlie, an overbearing actor sporting the highest-waisted trousers this side of Simon Cowell; Eric Carte credibly authoritative as Crosby the lawyer; Tracy Shaw as Annabelle, the heroine, combining strength and vulnerability; and Priyasasha Kumari as an appealing Indian princess.  They’re a pretty tight ensemble, breathing life into what could be little more than stock characters, and I’m particularly impressed by Antony Costa as the bumbling Paul Jones.  Costa warms to his role; in fact, the play takes a while to bed in, but once all the elements are in place, suspense and humour vie for dominance in this effective, old-school thriller.

Roy Marsden’s direction teases us with suspense, gives us a couple of good jump scares, contrasting the play’s lighter moments with its darker aspects and tensions.  Themes emerge of the past affecting the present: the old man’s will from twenty years ago is the catalyst for the action; a trauma in Annabelle’s childhood threatens to unsettle her; the desire to restore what was plundered from a previously colonised country; and most strongly, the PTSD suffered by those who fought in the War.  Only the escaped lunatic, it seems, has no back story to explain his excessive behaviour!

The substantial set (designed by takis) adds to the oppressive atmosphere, and I especially like the framed pictures of single eyes that cover the walls of Annabelle’s bedroom.  Chris Davey’s lighting design adds to the tension, while Dan Sansom’s sound design can be a little intrusive, it does provide a couple of startling moments.  And they need to go easy on the dry ice at curtain up!

On the whole, this is a gripping, old-fashioned evening at the theatre, proving that a play originally produced almost a century ago still has the power to thrill and entertain, and it makes a refreshing change from the back-to-back musicals on offer at the moment!

AND THEN THERE WERE NONE

The Agatha Christie Theatre Company revisit this classic mystery for their current UK tour; I saw their 2008 production but I couldn’t for the life of me remember who done it. Even if I had, or if you know the story, there is much to enjoy here. This kind of old-fashioned, solid entertainment provides opportunities to see some of our finest character actors doing their thing.

A group of strangers gathers in a large house on a remote island. They have been invited there under false pretences. Early moments are like the first night in the Big Brother house as they introduce themselves to each other (and to us) before the tension begins its slow burn, and they start popping their clogs. The deaths seem to be related to an old rhyme that in this politically correct age is now about ten little ‘soldier boys’ – everything else is in keeping with the 1930s setting.   The art deco architecture of Simon Scullion’s set is remarkable.

Verity Rushworth is the ingénue, looking fab in a range of Roberto Surace’s evocative costumes. Rushworth’s lightness has a darker edge; she pitches it perfectly. Indeed as each character’s back story comes to light, we see beneath the veneer of civility. Paul Nicholas is suitably pompous as a high court judge, contrasting with Judith Rae as the housekeeper, with her down-to-earth nature and touches of humour. Frazer Hines is an unpretentious butler (making him prime suspect for a while, of course!), while Ben Nealon is the dashing Philip Lombard, all scorn and flash heroics. It is an absolute treat to see Susan Penhaligon as curmudgeonly old biddy Miss Brent – someone needs to employ her as Lady Bracknell at once; forget David Suchet! These are character types you find in Christie’s plays but this experienced and skilful cast humanise them beyond the requirements of the plot. Upper Class Twit Anthony Marston is made bearable by Paul Hassall’s portrayal. Eric Carte is rather sweet as General Mackenzie, resigned to his doom, and Mark Curry makes an impression as the somewhat neurotic Doctor Armstrong.

Director Joe Harmston handles the material with assurance; he knows exactly how to pace this type of thing, not rushing Christie’s sometimes ponderous script, and timing shocks and surprises with expertise. The result is a comfortably intriguing night at the theatre. The company takes us for a bit of a thrill ride, slowly but surely drawing us in as the plot reaches its conclusion. 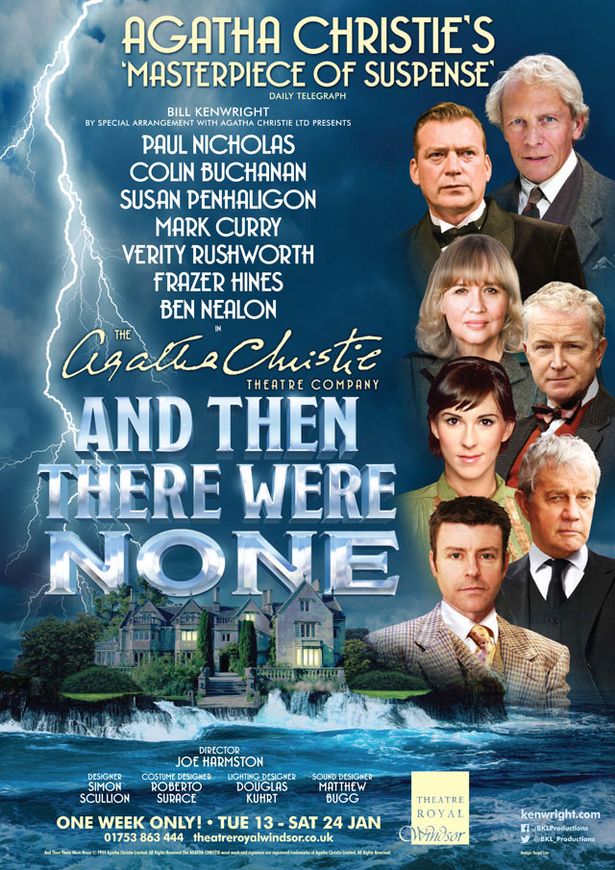