The Princess and the Proon

For their first pantomime since taking over the venue, Proon Productions present the fairy-tale favourite, combining a small cast of professionals with a cast of small amateurs: children from the Drama Club, taking on the roles of Snow White’s seven companions.

Steve Kray’s script reunites adult members of the audience with some very old, groan-worthy jokes.   Of course, for children, there are no old jokes; the delivery here is well-paced and the performance style is definitely old-school to match.  Small-scale this may be, but the energy of the performers keeps the panto spirit alive.

In the title role, Phoebe Cresswell is a sweet princess, high-pitched like Betty Boop or Disney’s version; her singing voice is less shrill, it’s very pleasant indeed.  As Snow White’s love interest, Prince Boris, the thigh-slapping Ellen Hastings certainly looks the part; she could do with more conviction in her princely swagger.  Joanna Gay’s cackling evil Queen is a major draw, stalking around melodramatically.  She is a fine singer too, although in some of the solo numbers, cast members can look a bit stranded on stage, with no backing dancers or special lighting to heighten the moment.  In perfect contrast with Gay’s histrionics, a pre-recorded Rebecca Hallworth appears as the even-tempered Magic Mirror, dispassionately doling out the truth.  There is even an appearance by company mascot, Mr Proon, himself.  Imagine Mr Blobby with class.

Steve Kray, not only writing and directing, appears as Silly Billy, whose downbeat Brummie intonations augment the comedic energy of the character.  Silly Billy is at his finest (daftest) working in tandem with Ellis Creez’s dame, ‘Nursie’ – a characterisation worthy of the admission fee alone!  Creez has immaculate comic timing and it’s as though he has travelled in time from a music hall.  He delivers quite lengthy patter with archness and charm and just the right amount of sauce.  There are times when his magnificent sculpted wigs cast his face in shadow; it’s a pity to lose those expressions!

The commitment from the youngsters is a delight to behold, each one of them doing their utmost to add to the fun.  They’re a strong team but I am particularly impressed by Alfie Lee as Watt and Sophia Lucas as Him.  Well-trained and enthusiastic, these dwarves could do a few comedy beards to help differentiate them.

There is much to enjoy here, it just needs a bit of tightening.  A more consistent use of musical cues, for example, like a few crashing chords to herald the entrance of the villain every time she comes on, would help sustain the atmosphere, rather than having the Queen arrive in cold silence.  And the baking scene makes absolutely no mess whatsoever – a missed opportunity for a bit of slapstick!

There is something for everyone, with the likeability of the performers and the corniness of the jokes carrying us through the familiar fairy-tale.  The show needs and deserves a large and responsive audience, that crucial pantomime ingredient that binds everything together.

Running until December 31st, with matinee and evening shows, Snow White is a refreshing alternative to CGI-laden blockbuster movies, tired Christmas telly, and violent videogames.  Book a family treat now on 01789 333990 or www.stratfordplay.co.uk 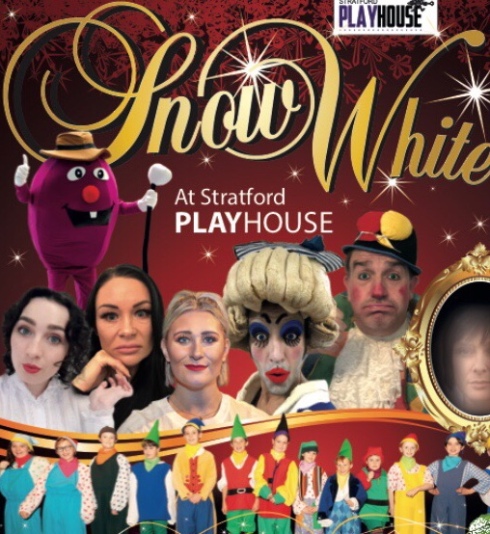