Many Wrongs Make a Right

THE PLAY THAT GOES WRONG

Those of us involved in live performance in any way will have stories to tell, usually for comic effect, about moments on stage that have gone awry: a prop that wasn’t there, a missed cue, a technical mishap, or even just the hell of being stranded in a scene with a co-star who is less than competent.  Writers Henry Lewis, Jonathan Sayer and Henry Shields have gathered all those moments and distilled them into a nightmare – for the actors.  For the audience, it’s a treat.

“Cornley Polytechnic Drama Society” are staging ropey old murder mystery The Murder at Haversham Manor.  Beset from the start by difficulties, they battle on to the bitter end, incurring injury and embarrassment along the way.  Patrick Warner plays director Chris Bean, bringing a touch of Basil Fawlty to his moments of extremis.   He also appears as Inspector Carter – our pleasure comes from seeing his characterisation slip as his desperation and exasperation grow.  Edward Judge is a delight as bombastic Thomas, declaiming in plus fours, while Alistair Kirton shamelessly plays to the gallery every time a bit of posturing receives approval.  Before long he has gained confidence and is gesturing and gesticulating like a semaphore signaller.  Meg Mortell flits around in the ingénue role until a mishap causes her to be replaced by a clueless stage manager who soon becomes violently possessive about her new role.  Jason Callender makes for the most mobile and expressive corpse you will ever see, and Edward Howells’s butler, hopeless at pronunciation, is consistently hilarious.  Add to the mix, Graeme Rooney’s less-than-conscientious lighting and sound operator and the drama that unfolds is not the one the drama society would like us to see.

Instead, the tension comes from watching this talented cast perform feats of physical comedy that are painfully funny.  We cringe at the awfulness of their plight, marvel at the way they get out of situations, and gasp at the surprises that crop up in their path.  Director Mark Bell manages the mania and the descent into chaos, giving us shocks and suspense, both of which we relish.

An unadulterated pleasure to have the chance to see this show as it tours again, but this time I am struck by what it says about us as humans.  The show-must-go-on mentality is a cliché, but beyond the theatre, this play going wrong can also be a metaphor for human endeavour.  Despite what life throws at us, there is a drive to keep things going, to bring order, to adapt and endure, even if it all comes crashing down around us.  It’s what enables us to survive as a species. 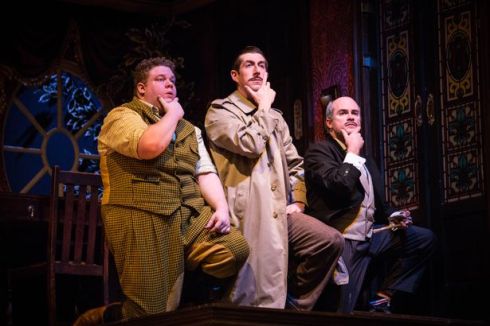