The irrepressibly feel-good musical comes to Brum for the festive season – an alternative to panto but the story has a lot in common with fairy tales.  Our heroine Tracy Turnblad longs to go to the ball (in this case, become a dancer on The Corny Collins TV Show), there’s a wicked witch (racist TV producer Velma) and a handsome Prince Charming (Link Larkin).  Mark O’Donnell and Thomas Meehan’s book captures the essence of the John Waters original film, while composer Mark Shaiman and Scott Whitman’s lyrics are clever, complex and witty.  Shaiman’s tunes are all memorable, drawing on the styles of the era.  It’s 1962 in Baltimore and society is segregated.  Until Tracy Turnblad comes along…

As the ever-optimistic, single-minded idealist, Freya Sutton knocks your socks off.  Her Tracy is an unstoppable force and instantly likeable, as she waves hello to rats, drunkards and flashers on her way to school.  Her mother, Edna (Tony Maudsley) has self-esteem issues – Maudsley is spot on as a gruff-speaking Edna, gradually coming out of her shell and learning to love herself for who she is.  Partnered by a sprightly Peter Duncan as husband Wilbur, the pair stop the show with their duet, You’re Timeless To Me.  Duncan’s Wilbur is a mass of energy himself (much is made of the disparity in size between wife and husband) making the role his own – Tracy must get her vivaciousness and sense of social justice from somewhere.  Duncan’s characterisation shows us exactly where.

Brenda Edwards brings the house down as Motormouth Maybelle with the soulful anthem I Know Where I’ve Been, in the show’s goosebumps moment; while Claire Sweeney’s elegantly vile and villainous Velma is a lot of fun – daughter Amber (Lauren Stroud) is the petulant, immature version.  Monique Young gets laughs as Tracy’s awkward friend Penny.  She embarks on an interracial relationship with dynamic Seaweed (an excellent Dex Lee) bringing the political thrust of the show to a personal level.  Jon Tsouras is cheesily good as TV host Corny Collins and Ashley Gilmour makes an appealing Link.  They are all supported by a superb ensemble of vibrant youngsters – although special mention must go to Adam Price and Tracey Penn who reappear in a range of ‘authority figure’ roles, from school teacher to prison guard.

The energy coming off the stage is infectious, thanks in no small part to the exuberant choreography by Drew McOnie.  Director Paul Kerryson lets the social issues emerge without browbeating us, although when Motormouth sings she prays to her god and a picture of Martin Luther King Jr appears on the TV screen, it’s a little on the nose.  My favourite number, I Can Hear The Bells, is splendidly staged, charting Tracy and Link’s entire relationship even though she has only just met him, in a swirl of teenage naivety and romanticism.

The show’s message about tolerance of others and acceptance of self still rings true.  Hairspray will have you laughing and clapping along but it will also prick your conscience and remind you that the struggle goes on.  You only have to look from Velma to Donald Trump to realise we are still plagued by blondes with ridiculous hairdos spouting hateful and divisive nonsense. 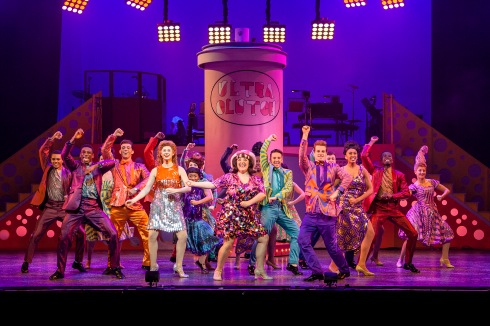