Death Does Them Part

All the love has gone from the marriage of Victor and Joan Smiley.  She is having an affair with a bit of rough and he is a regular client to a Polish prostitute who happens to be psychic (she can see you coming). Victor is plotting to murder his wife and run off with Kamila, who in the mean time is using her psychometric abilities to help the police find murder victims.  Add in a likeable but inexperienced young detective inspector and the stage is set for a lively evening of laughter, thrills and suspense.

Shaun McKenna’s adaptation of Peter James’s novel is very funny – the bickering between the central couple is acerbic and sometimes cruel – and it’s played to the hilt by Robert Daws and Dawn Steele, who both drip with bitter sarcasm.  Gray O’Brien is energetic as Joan’s bit of stuff, while Simona Armstrong’s Kamila pulls off some potentially awkward scenes of psychic flashes.  Thomas Howes teases out the tension as D.C. Grace.  It’s not so much a whodunit but a will-they-get-away-with-it, and there are shocks and twists along the way.

Michael Holt’s split level set gives us four rooms all at once so the action can keep flowing without any pesky scene changes, (keeping a chest freezer centre stage…) Mark Howett’s lighting and Martin Hodgson’s sound enhance the suspense and bring a touch of the supernatural to the proceedings. Director Ian Talbot places emphasis on the fun – we enjoy the performers even if we find the characters deplorable.

With its many references to popular crime fiction, the play is a refreshing change from the country house, drawing room, murder mysteries that usually do the rounds.  Not only is there a discussion of which Sherlock Holmes has the best bum, there is a knowingness that informs the plot: the characters have all ‘seen it on the telly’ and so has the audience, but The Perfect Murder is fresh and engaging.  You are guaranteed a good night out with this entertaining black comedy chiller. 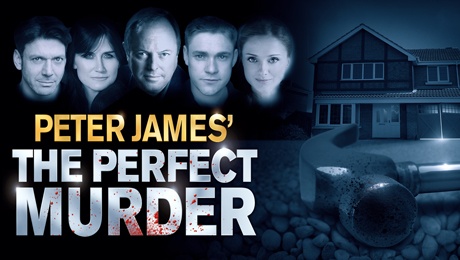 This little-known Noel Coward piece was stashed away for decades because of its basis in real-life marital infidelities and so, to protect the guilty, has not seen the light of day until now.

The setting is the exotic Mount Fumfumbolo, which is a volcano and not a puppet in a kids’ TV show. On the side of this volcano, overlooking her banana plantations, widow Adela (Jenny Seagrove) enjoys solitude, the occasional company of her friends and a bit of a fling with louche Lothario, Guy (Jason Durr). He’s been chasing around the mountain but she, although in love with him, will not bump nasties with a married man. She keeps the lid on her simmering desire, you see, bit like the dormant volcano of the title.

Guy’s Mrs shows up and outbitches everyone at a tense little cocktail party. Were it not for the sultry, almost Tennessee Williams setting, this would be a run-of-the-mill suburban drama, with inferior epigrams and an unremarkable premise. However, in the second half, when the volcano blows its stack, the characters are thrown into physical as well as emotional crisis. Guy is unfaithful but not with Adela after all – he shacks up with young bride Ellen (Perdita Avery) in a shack, to take shelter from the eruption. Scratchy wife Melissa (Dawn Steele) rises above it all with some superior archness. Everyone seems to go back to England and poor Adela is left to reconstruct her homestead (three busted light bulbs and some overturned furniture) and finally ‘enjoy’ her solitude and her bananas. It is the calm after the storm, the aftermath of the outpouring.

Jenny Seagrove is elegant and likeable as Adela. Jason Durr is tanned and smarmy as Guy. I particularly liked Finty Williams as Grizelda. Most Cowardesque of the bunch is Robin Sebastian as her husband Robin. The cast keep on the right side of the ‘teddibly teddibly’ kind of delivery and Dawn Steele oozes arrogance and evil as uberbitch Melissa. Roy Marsden’s direction keeps the somewhat outmoded dialogue sparking along, although when the volcano blows, I would rather see a blackout than the dangling gantry of lights and the plastic plants being strewn across the stage.

It is a pity this play didn’t do the business when it was written in the 1950s. Being shoved in a drawer and forgotten denied it its initial impact and robbed it of becoming a theatrical milestone for its frank discussions of sex, morality and sexual politics. Now its time has passed. The world has moved on in more ways than one; the play is something of a curiosity rather than the cutting-edge discussion-provoker it should have been.