When it was first staged in the 1970s, the show was a nostalgic look-back at supposedly simpler times.  The film version, starring John Travolta and Olivia Newton-John as positively geriatric teenagers, became a phenomenal global hit, still highly popular, and giving the stage show a new lease of life that shows no signs of failing.  Inevitably, with the film so fixed in the popular consciousness, there are audience expectations that director David Gilmore must meet.  We know how Grease should be done.  Or we think we do.  Some of the songs don’t appear at the same points in the story as they do in the screenplay.  Other numbers, only background music in the film, are given centre stage here.  Conversely, what appears in the film but not in the show, has been interpolated here: chiefly, the opening number by songwriter supremo, Barry Gibb.

Plotwise, it couldn’t be simpler.  Boy meets girl but they’re in different groups at high school, where peer pressure is irresistible… Who will change to overcome the cultural divide?

Frankly, the T-Birds, all leather jackets and DA haircuts, come across as a bunch of twats.  Danny (Tom Parker) feels obliged to deny his feelings for Sandy (Danielle Hope) in order to keep in with his laddish mates.  For her part, Sandy is too straitlaced to be fully integrated into the girls’ gang, the Pink Ladies.  Parker, former member of boyband The Wanted, sings competently; his real strength is in the physical comedy of his portrayal.  Hope is suitably prim as Sandy, her singing voice rich and with a more mature sound than her girlfriends.

Louisa Lytton is a brassy Rizzo.  She gets the ‘dramatic’ moments when a pregnancy scare allows her to belt out There Are Worse Things I Could Do.  Like Danny, she is hampered by her public image.  Revealing her true self would be a sign of weakness.  And so, the show is about the pressures on teens to conform – with whatever group they wish to be part of.   Also, Frenchy (a vivacious Rhiannon Chesterman) feels she can’t tell her friends she has flunked out of beauty school, while her would-be suitor Doody (Ryan Heenan) is physically incapable of stringing the words together to ask her to the dance.

Heenan stands out among the T-Birds as the likeable, little one.  He gets a couple of solo moments, showcasing his talents.

Greased Lightning is a big production number with Tom Senior’s Kenickie cranked up to 11.  It’s loud and brash, laddism writ large.  It’s like being beaten up by a song.

Treat of the night comes from a cameo appearance by ‘Little’ Jimmy Osmond himself as a somewhat superannuated Teen Angel.  Pure showbiz royalty, Osmond knows when to milk it, knows when to be cheesy – how dairy!  His song brings the house down and such is his charisma and the fact that IT’S JIMMY OSMOND, we hardly notice the showgirls swanning around in true Las Vegas style.

The energetic ensemble generates a lot of heat.  Arlene Phillips’s choreography is flashy and fun, adding to the infectious quality of the show.  People are here to have a good time.  This audience doesn’t need warming up.  It’s a party of a show, a guaranteed good time and a chance to escape from whatever it is you might want to escape from.  Cosy and safe, Grease is a reliable crowd-pleaser – and there’s nothing wrong with that. 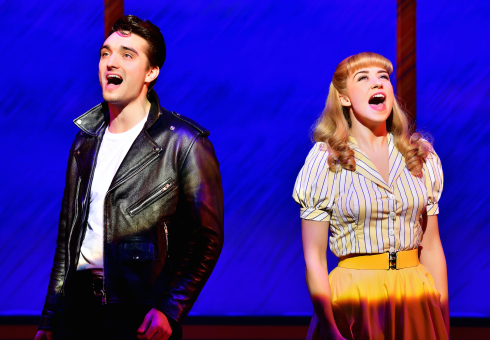 You’re the one from The Wanted, oo-oo ooh. Tom Parker and Danielle Hope