The Quite Remarkable Adventures of THE OWL AND THE PUSSYCAT

Edward Lear’s famous nonsense poem was the springboard for a book by former Python Eric Idle.  Now the book is adapted for the stage by composer and musical director, Dougal Irvine (who also provides the voice of the ‘Small Guitar’ and an imaginary dragon!).

The production is nothing short of charming.  An energetic ensemble of actor-musicians, led by Irvine, get proceedings underway with an audience singalong – normally the kind of thing to make me shrink in my seat, but the tune is infectious, the lyrics (including animal noises) are fun, and so I join in and am immediately put into a good mood, and predisposed to think kindly of the action as it unfolds.

The titular pair, both riddled with self-doubt and low self-esteem, form a bond when, Deep Impact style, they notice a comet is heading directly for the Earth, threatening an extinction event not seen since the dinosaurs were wiped out.  They inform an appropriate human at a university and set out on a quest to find the runaway Bong Tree (voiced by Idle himself, no less!).  Meanwhile, the show’s baddie, Lord Firelord is planning to wipe out all life on Earth with the creation of a new ice age…

The charm of the actors and the richness of the score, with its lively melodies and clever lyrics, keeps us on board this ride in the pea-green boat.  There is some social comment here – humans are too preoccupied with shopping to notice or care about their imminent destruction, and there is an obvious environmental message – but I think the show’s ‘lessons’ are in danger of being considered ‘nonsense’ along with the rest.  Characters take pride in speaking nonsense; anything they say that we are meant to take on board could easily be dismissed…

That aside, this is an enjoyable, family show, performed with verve and heart.  Danny Lane as Owl, and Sally Frith as Pussycat, are likeable protagonists, and their singing voices blend magnificently in their duets.  Miri Gellert impresses, voicing two glove puppets at once – similarly, Yanick Ghanty portrays a pair of henchmen simultaneously.  A comic highlight of the show is when he falls out with himself and beats himself up in a skilful display of physical comedy.  Vedi Roy plays bad guy Firelord with relish, complete with maniacal laughter, although I found his costume made him look like an Indian Elvis in Vegas.  Lizzie Wofford’s Pig and Professor Bosh show her versatility as a character actor – her singing voice is particularly powerful.

Director Hamish Glen balances larger-than-life characters and outlandish events with quieter, emotional moments, allowing the cast to bring out the ‘human’ (for want of a better word) side of the characters.  The kids in the audience are clearly enrapt by the drama with its themes of global extinction and mortality, friendship and love, while the adults enjoy the sharper jokes.  Libby Watson’s versatile set forms a backdrop for Dick Straker’s video projections, to depict the story’s various locations attractively and economically.  But for me, the production is all about one man – Mr Dougal Irvine.  His script is enriched by his compositions, a beautiful score other, larger productions would do well to emulate (I’m looking at you, Wonderland!) 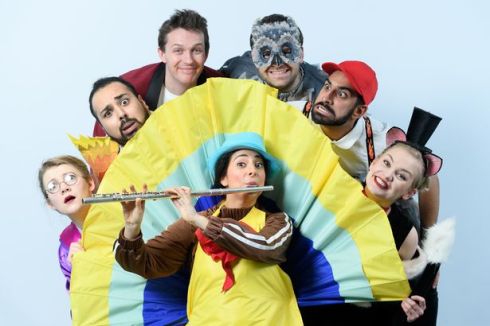