How entirely appropriate that this revival of Jez Butterworth’s 1995 play should be staged at the Harold Pinter!  With its repetitive dialogue, vernacular idioms, pauses, off-stage menace and outbreaks of violence, and not least its sense of humour, this is very much a Pinteresque piece, albeit one on some kind of uppers that may turn one’s urine black.

The setting too is straight from Pinter’s early works.  Two men in suits are waiting in the upstairs room of a Soho club.  They talk about banalities and unseen powerful men in the back room.  Some kind of powwow is under way.  These two are very much a double act throughout the play, sparking dialogue off each other.  It is 1958 and I can’t help thinking of The Dumb Waiter. There is Sid (the excellent Daniel Mays) a bit of a livewire and a man of ideas, and there is Sweets (Rupert Grint – something of a revelation).  It takes some getting used to hearing Ron Weasley talk about ‘minge hair’ and swear like a navvy, but Grint is more than a match for the rest of this more-seasoned cast in his stage debut.

Elder member of the cast, Brendan Coyle as co-owner of the club Mickey tries to keep a lid on the situation when offstage rivals make their move to take over, a move that involves violence of a particularly horrific nature.  Coyle exerts a kind of nervous authority over his younger henchmen, among them is TV’s Merlin, Colin Morgan as Skinny, giving a gripping performance, intense and hilarious in equal measure.  Tom Rhys Harries is club singer Silver Johnny, who has the most demanding role, physically speaking, hanging upside down by his ankles for most of the second act, thanks to the actions of a hypnotically superb Ben Whishaw as resident psychopath Baby.   Whishaw is as deadly as a snake – you can’t take your eyes off him, at turns chilling and then startlingly funny, and always surprising. He is prone to bursting out into full-throated song, leading me to think he should give us his Hedwig (of Angry Inch fame rather than the messenger owl Grint would recognise).

Butterworth’s script gives us Pinter’s Kray Twins-like milieu, with post-Tarantino, post-Guy Ritchie language.  One woman, who in the interval complained about the ‘bad’ language, was among the first to get to their feet at the curtain call to applaud this superior ensemble for a job intriguingly, amusingly, and thrillingly well done.

Ian Rickson directs with an assured handling of the contrasts in pace and tone, flipping moments from one extreme to the other and then back again.  The rhythms of Butterworth’s script come through, the heightened naturalism and also what the characters are not saying between the lines.  It’s all dressed in the evocative designs of Ultz, solidly representing the era and adding credibility to the air of menace.

It’s a revenge play of sorts, darkly funny, and consistently gripping.  Mojo is a brutal couple of hours, but wholly enjoyable, skilfully played by a cast of high calibre. 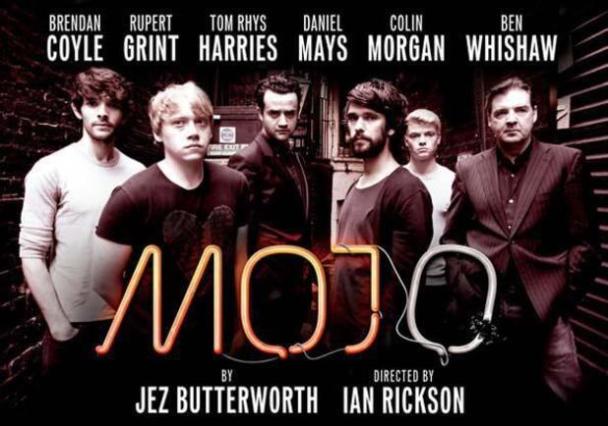