Set in the common room of a retirement home, this musical comedy adapted from the German original, has a cast of elderly characters, portrayed by much younger actors – a good thing: they move and act like old people but their singing voices retain the power of their comparative youth.

There is next to nothing in the way of plot and character development, and very little dialogue, come to think of it. Instead we spend a couple of hours in their company. There are periods of quiet, comic action and there are songs and plenty of them. In an eclectic song list that ranges from Joan Jett to Joan Baez, some lyrics take on additional significance. “The time to hesitate is through,” they sing during The Doors’ Light My Fire. Indeed.

The residents are patronised and coerced by Sister George (Georgina White) and here lies most of the show’s inherent conflict. On the whole though, they seem to rub along quite nicely – at one point a slow-moving (not slow-motion) slapstick spat breaks out, providing some measured, perhaps a little too slow, clowning.

Dale Superville is in fine fettle, with some physical shtick and a strong singing voice. His falsetto version of R E S P E C T goes down well, but his sweet duet of I Got You Babe with his sweetheart (Clara Darcy) is a highlight. Darcy goes on to give a plaintive rendition of Nirvana’s Smells Like Teen Spirit which becomes embittered and stirring when the others join in. In fact, the ensemble singing is delightful, harmonised to perfection. Stefan Bednarczyk (who co-adapted the piece with director Giles Croft) proves himself a versatile pianist, covering a vast range of musical styles. The excellent Rebecca Little hurls invective to comic effect and, when her prosthetic leg comes off, launches into a wistful Barbie Girl.  The nostalgia factor is strong in this one. When the elderly are asked to sing songs of the old days, and they come out with 90s pop hits, you know you’re getting on.

It’s quite bonkers when you think about it but the spectre of mortality is waiting in the wings. Live life, the oldies urge us, and don’t let the bastards grind you down. This gets a cheer from the audience, comprised mainly of white-haired people (refreshing to be among the youngest present!), but for all its feel-good fun, it’s not as funny as it thinks it is. Perhaps something was lost in translation and the European humour doesn’t travel. The first half is too long and some business is drawn out too far. We don’t get to hear John Elkington’s Imagine after three or four false starts – a pity; he is in great voice (when he’s not falling off the stage or breaking wind).

It’s a pleasant couple of hours but it’s a packet of biscuits rather than a meal. 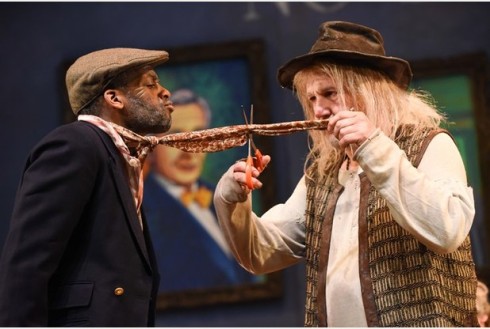 GRANDPA IN MY POCKET

I have limited knowledge of the television programme.  I know James Bolam is in it and that’s about it, but on arrival at the theatre, I found myself surrounded by young aficionados, ardent viewers all, who were able to call out names of characters who had yet to appear on stage.  It was a bit like wandering into a meeting of some kind of cult.

To get around the absence of the original actors, the cast announce they are going to pretend to be the characters.  They grab bits of costume and props from their dressing-up box and it’s on with the show.  It’s a lively, bouncy, colourful affair with jolly, tuneful songs and a likeable cast who keep energy levels high.

Set in the idyllic Sunnysands – a place where everyone is cheerful without being overbearing about it – this is the story of Jason Mason and his grandpa, who possesses a special flat cap that enables him to shrink to pocket size.  On the telly, special effects of this kind are a doddle but I was interested to see how they would achieve this change of scale live on stage.  The solution is a series of puppets of decreasing size and some clever sleight of hand.  This is a production that translates the television show to the stage with no short changes or lazy video tricks.  The enthusiastic young audience (and me too) are treated to a purely theatrical experience – how refreshing for those little kids to experience something live and not on screen.

The show uses the conventions of theatre, including some audience involvement (i.e. shouting out) borrowed from pantomime.  Things can get pretty loud.  Of course, the characters are never going to be in any serious jeopardy and nothing really bad is going to happen.  There is an ongoing mystery of valuable objects going missing and half of the cast end up stranded on Bongle Island, but you can bet your life Grandpa is going to save the day.

It’s a thoroughly charming piece, amusing rather than laugh out loud funny.  Of the many songs, the one about the Bongle Birds stuck in my mind.  The energetic company of six keep things moving, sharing the puppetry and sometimes doubling up their roles.  Javan Hughes makes a likeable Jason Mason, with Lizzie Franks as his mum and also his eccentric Great Aunt Loretta, whose culinary inventions could give Heston Blumenthal a run for his menu.  Sam Worboys is a rather young Dad, as well as a dotty Mr Mentor the Inventor and cycling enthusiast Mr Liker Biker.  Dale Superville is great fun and has great fun as Horatio, a banker who longs to be a pirate.  Insert your own satirical comment here. Ebony Feare veers sweetly from young girl as Jason’s sister to grown woman as Miss Smiley.  Finally, Robin Simpson plays the man-sized Grandpa and also a toy shop owner with some comic form of dyspraxia the kids all seemed to adore, Mr Whoops.

This cheerful production worked its magic on the kids – it’s a show for them rather than a family audience, but as a so-called grown-up I found much to enjoy in the form of the piece and the exuberance of the performers. Created by Nottingham Playhouse and touring all over the country, this is an excellent summer treat.

Grandpa in My Pocket?  I was pleased to see it.