I am wary of musicals based on films. The bland show born of tepid rom-com Legally Blonde is a prime example; and so it was with caution that I approached the “musicalisation” of Whoopi Goldberg’s 1992 hit.

I need not have worried.

The show is a complete joy from start to finish.

The adaptation is set two decades earlier than the film and this turns out to be a very wise decision indeed, allowing Alan Menken’s score to indulge in some very funny pastiches of 1970s soul and R&B music. This is when R&B meant ‘rhythm and blues’ and not the ‘rubbish and bollocks’ of our day and age.

Protagonist Dolores (an energetic Cynthia Ariva) sings lead in an all-girl trio. Their opening number evokes The Three Degrees and the Philadelphia sound. She witnesses her club-owner boyfriend murder a man and ends up in an ad hoc witness protection set-up at the local nunnery. Here she is put in charge of the choir and before long has them raising their voices and increasing the size of the congregation. She meets with opposition from the Mother Superior (Denise Black). The show dances around the schism in Christianity, the different approaches to worship from the traditional to the happy-clappy, and touches on notions of what is being worshipped at all. Is it the divine or the human that deserves such celebration and devotion?

This is only an undercurrent, there if you want to see it. The show is knockabout fun – nuns do very well in musicals – and there is a relentless, feel-good vibe coming off the stage that got me to my feet and shaking it like I was Mary Magdalene. It is the score that shines brightest. The almighty Alan Menken (Little Shop of Horrors, Beauty & The Beast, Aladdin…) fills the show with delight after delight. The film used songs from popular culture; in the show, all the music is original and it works much better. Glenn Slater’s lyrics are witty and meaningful. This is a rich, traditional musical with a postmodern slant. The pastiches feel authentic and give the piece a distinctive sound that sets it apart from the movie soundtrack.

Bad guy (Cavin Cornwall) croons his intention to kill Dolores, while his henchmen perform moves the O’Jays would have been proud of. Good guy, Sweaty Eddie, tears off his police uniform to reveal a white jump suit for his Barry White/Marvin Gaye number – then tears off his jumpsuit to reveal his police uniform again, as he returns to reality. Michael Starke (Sinbad off of Brookside) has fun as the Monsignor and Denise Black (in the Maggie Smith role) provides most of the depth. In the lead, Cynthia Ariva is astounding. There is a hint of Whoopi Goldberg to her characterisation, an acknowledgment of the character’s provenance, but on the whole Ariva makes the part her own and the evening belongs to her.

The sets and costumes and indeed the size of the company all show that this is a high quality touring production. It is heartening to see that the provinces are not being short-changed or stinted with cut corners or dilutions. 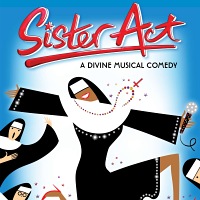