Arthur Miller’s 1947 play – one of his great domestic tragedies – receives a refreshing new production from the acclaimed Talawa theatre company, with an all-black cast. It’s an interesting take and what ultimately comes across is that it’s not the colour of the skin, it’s the common humanity underneath it that gives this piece its power.

Joe Keller (Ray Shell) is looking forward to handing over his factory to grown-up son Chris (Leemore Marrett Jr) but Chris has other ideas. He wants to marry Annie the former girlfriend of his brother Larry, who has been missing for three years or so. Larry’s mother and Joe’s wife Kate refuses to believe that Larry is gone for good. She’s even got neighbour Frank to draw up a horoscope for Larry in the hope of reassurance.

Yes, there is tension beneath the surface but on the whole they seem like an amiable bunch – funny, even. But Arthur Miller won’t let things go on like this for much longer. Gradually, details bubble to the surface and patriarch Joe must face his past transgressions. Ray Shell is marvellous as Joe, paternalistic and funny. He and Leemore Marrett Jr share some explosive ding-dong scenes, beautifully handled by director Michael Buffong.

Also excellent is Dona Croll as the matriarch desperate to keep things together through the power of denial. In fact there is much to appreciate in this production, which comes across as more of an August Wilson than an Arthur Miller – but it is Miller who is the man of the moment – everyone’s doing him in this year marking the centenary of his birth.

There is character work to be savoured: Andrea Davy as neighbour Sue; Chinna Wodu as amateur astrologer Frank; Bethan Mary-James as Frank’s pretty wife (easily the most Tennessee Williams-like of the characters!) – all make an impression. Kemi-Bo Jacobs Ann is stylish and has great poise but I wish she wouldn’t roam around the set so much, like a graceful princess from a different story.

Director Michael Buffong needs to keep an ear on the accents, for consistency, so that they don’t roam around either.

Ellen Cairns’s beautiful set suggests the sultriness of a Tennessee Williams, although in this play it is not sexual worms that are spilling out of the can.

It all unfolds at a steady pace and though the ending has more than a touch of Hedda Gabler to it, Miller’s play still packs a punch and is served very well in this eminently watchable and emotive production. 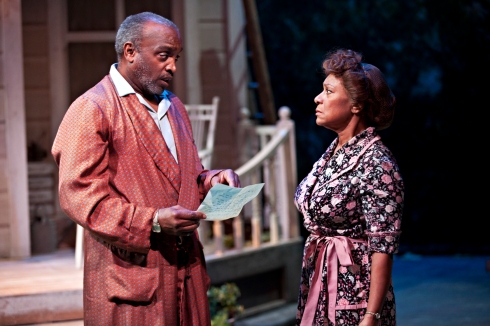