Stephen Karam’s snappy script is brought to life in this new production by a trio of energised performers.  Set in an American high school, it covers the experiences of three loners who come together to form a debate club when it emerges that they each have a reason to bring about the downfall of the drama teacher…

Solomon is a neurotic mass, an uptight reporter for the school newspaper.  He wants to write an expose to bring the hypocrisy of the mayor (and the drama teacher) into the spotlight.  Dinata is a lonely girl, a wannabe actor who uses theatrics to get by, podcasting and blogging away, always with her eye out for the chance to perform.  Howie is the new kid at school – it is his online chat with the drama teacher that opens the show and gets the ball rolling.

Douglas Booth is in excellent form as Howie, portraying the boy’s fragility rather than his campness.  His barbed lines are exquisitely timed, and there is an appealing vulnerability to his presence.  Patsy Ferran has never been better as Dinata, the driving force behind the debate club, the funniest of the three.  Wise-cracking and sardonic, she is not as hep and cool as she pretends.  Her songs are sweetly funny – and the musical numbers are definite highlights, allowing Ferran to shine.  Booth also proves himself as a physical comedian, while Tony Revolori’s understated moves have their own hilariousness.  Revolori is superb as the tightly wound, crusading Solomon, who has to come to terms with his own contradictions.

The trio is strongly supported by Charlotte Lucas who appears in grown-up roles as a teacher and a reporter, but for the most part it is the dynamics between the three loners that holds our attention.  Director Tom Attenborough keeps the action sharp and the dialogue going off like firecrackers.  Economic use of projections show us the online chats that, along with references to Mike Pence, make the script bang up-to-date.  The play is not finally about the issues up for debate; it’s the time-honoured theme of teenage awkwardness, of being uncomfortable in one’s own skin.  And it’s an absolute delight.  A well-observed, snappily presented comedy that reminds us how modern technology can serve to keep us isolated or get us into trouble.

P.S.  If Douglas Booth feels like sending me pics, I would not mind one bit. 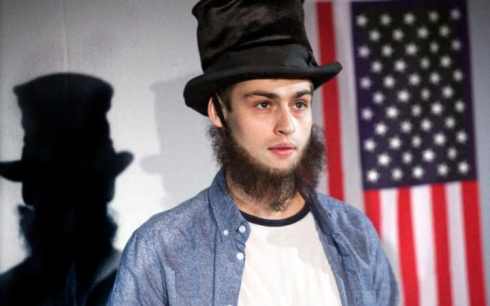 Was Honest Abe gay? One of the topics up for debate! Douglas Booth as Howie (Photo: Simon Annand)