Alex Mackeith’s debut play is a cracking contemporary comedy that opens a window into the pressurised world of the primary school head teacher.  Hard-working, beset from all directions, Jo (Ann Ogbomo) appears indefatigable, able to juggle several balls and spin plates all at the same time.  She seems on top of everything but even so, with all the demands made on her, she is running to stand still.  Ogbomo is passion on legs, imbuing Jo with strength and conviction, and also vulnerability – her emotional life is suffering because of her work.  We glimpse the woman in pain when, in unguarded moments, Jo’s professional face is allowed to slip.  She is supported by secretary and wannabe teacher Lara (Fala Evans-Akingbola), fielding calls and organising Jo’s day with efficiency and nervous energy.  Lara is boning up on educational theory but, as Jo points out, ‘real kids’ aren’t like that.  The play hints that the wealth of experience of someone like Jo is disregarded by the policy makers and textbook compilers.  It’s SATs results day and the suspense is palpable…

Enter part-time tutor Tom (Oliver Dench), a posh boy who would be better off on a gap yah.  Socially inept, Tom professes to be keen to help, even if it’s just with teas and coffees, but it emerges that his approach is at odds with what the children need to get them through the processing the system demands.

Sometimes the play verges on the polemical but Mackeith leavens the proselytising with sharp, funny dialogue that has a ring of truth.  He is, perhaps, preaching to the converted.  Director Charlie Parham keeps the pace snappy.  Lines collide naturalistically, arguments build, and punchlines bite, while allowing space for character-led comic business – Dench is particularly good at this: we wince at Tom’s behaviour.  Moments of quiet and moments of crescendo are all the more powerful among the rapid-fire stichomythia.

Exquisitely and believably played by a strong quartet (Kevin Howarth appears as an aggravated parent) this is a timely, thought-provoking insight into those working at the chalk-face (whiteboard-marker face!) – an abject lesson in the effects of the failing policies of successive governments, showing the human face of those who have to work within the constraints of mandates and number-crunching at the expense of the children of this country. 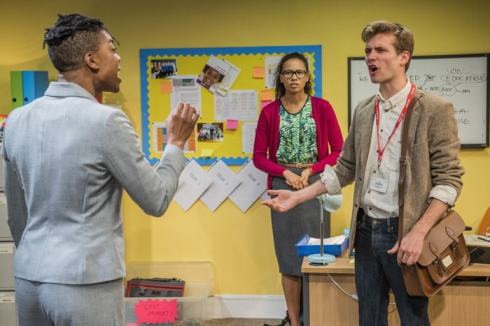