This season the RSC present three of Will’s plays linked under the theme of shipwreck. The other two are The Tempest and The Comedy of Errors – the latter has more in common with Twelfth Night. In both, twins are separated by maritime disaster leading to confusion, mistaken identity and high jinks aplenty.

This production begins not with the famous opening line (If music be the food of love, play on) but with Viola clambering onto the stage from a downstage water tank and asking, “What country, friend, is this?” This brief moment serves to “brand” the show as part of this trilogy and seems to me a tenuous way to compile a season.

When we meet Duke Orsino (Jonathan McGuinness ) he is not the lovesick, self-indulgent in his suffering, egoist. Rather he is a shouty, angry young man, who seems to equate the loudness of his voice with the depth of his professed love for the lady Olivia. I couldn’t take to him. And I couldn’t see what Viola sees in him. It is a discordant note in a production that gets many things right.

The set is a shipwreck. The lounge deck, with grand piano, chandelier, faded upholstery and a reception desk in the corner. Characters come and go dressed like holiday makers in the 1990s. Viola adopts a blue jacket with shoulder pads and turquoise trousers in order to disguise herself as manservant Cesario. She looks like Tintin dressed as Don Johnson off of Miami Vice.

Toby Belch (Nicholas Day) totters drunkenly across the uneven floorboards in Hawaiian shirt and loafers. He is a likable sot but upstaged at every turn by Bruce MacKinnon as Sir Andrew Aguecheek. Think Jedward’s elder brother with his finger in a plug socket for his hairdo. Think Rik Mayall in his early days for a hint of the performance style. MacKinnon wrings pathos out of the role as well as showing us what a complete arse Sir Andrew is. At one moment, he drops from the edge of the stage and into the water in order to escape trouble. Several members of the audience received a drenching. The range of their reactions added to my enjoyment of the scene!

As Malvolio, Jonathan Slinger proves he is an accomplished comic performer. His puritanical steward sports a toupee and a gleaming name tag as his badge of office. It is a very tight characterisation and when the action requires more physicality to the comedy, Slinger keeps it credible but still very funny. His exit, up a staircase, while cross-gartered in yellow stockings and his arse hanging out of a thong got the biggest laugh of the night. His final appearance, abused and ridiculed, shows the depth of his feeling. He is not going to laugh it off, take the joke and make peace. He swears he’ll be revenged on the whole pack, and his look takes in the entire auditorium. Not everyone in this rom-com is going to wind up with a happy ending.

And that’s part of the genius of this piece. The whole play is riddled with melancholic moments, most notably within the songs. Feste (usually a jester but here a lounge musician – Kevin McMonagle – practically busking for change) performs several tunes with modern arrangements but the nature of Shakespeare’s lyrics foreshadows the preoccupations of the emos of today. The play is bitter-sweet. The production suggests shipwreck as a metaphor for the affect love has on us. Some have their hopes dashed; others are salvaged and restored to life.

I liked plucky Viola (Emily Taafe) and I felt Kirsty Bushell portrayed Olivia’s arc very well, from languishing in mourning her dead brother to being reawakened to the possibilities of love and life. Best of the crop though were Bruce MacKinnon and Cecilia Noble (as scheming maid Maria). There is much to enjoy in this production but you’re more likely to come out of the theatre with a wistful sigh than a ribcage aching from laughter. 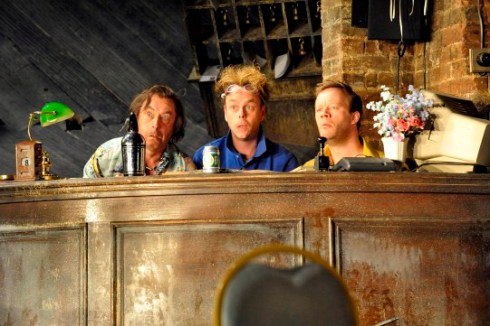