I am lucky to catch this 50th anniversary production just before it reaches the end of its run and I can only kick myself for not going sooner and allowing time for return visits.  Ground-breaking back in 1967, in terms of sound and format, the show comes across as fresh as a daisy you might wear in your hair.  Members of the ‘Tribe’ make observations of society: civil rights, pollution, war, while the ongoing plot involves handsome Mancunian-wannabe Claude (Robert Metson in fine voice) wondering whether to burn his call-up papers and stay with his hippy friends, chiefly Berger – the excellent, nay perfect, Andy Coxon.  Berger, king of the tribe, is a charismatic figure, sexy, funny – Every time I see Coxon perform I fall in love with him all over again, and that’s before he gets his bum out.

Shekinah McFarlane’s Dionne gets things off to a searing start with her powerful vocals in ‘The Age of Aquarius’; she also plays a mean saxophone later on.  Liam Ross-Mills’s Woof gets carried away with a Mick Jagger poster; Patrick George’s Margaret Mead has fun recruiting an audience member to be her ‘Hubert’ – in fact, everyone gets their moment to stand out: Laura Johnson’s Sheila, Jammy Kasongo’s Hud, Jessie May as barefoot and pregnant Jeanie… The strength of the solo singing is matched by the beauty of the ensemble’s harmonies.  Galt McDermot’s rock-informed score is rich with variety and contrast, while the lyrics by Gerome Ragni and James Rado (and William Shakespeare) range from witty to hard-hitting.  The show is one big highlight.

The cast is not the only thing stripped bare.  The staging is kept minimal, keeping the performers to the fore.  Director Jonathan O’Boyle makes simple but sophisticated use of parachute silk and the occasional prop, keeping us in the Tribe’s trippy world.  An extended tripping sequence is chock-full of striking imagery.  Obviously, the lighting (by Ben M Rogers) helps tremendously with creating atmosphere and a sense of place, but I want to make special mention of the sound design by Calum Robinson and Max Perryment:  aurally, the show is magnificent. Solo voices, ensemble singing, the band and sound effects are all blended to the utmost clarity.  It is a real feast for the ears.

The band, under the musical direction of Gareth Bretherton, is kept behind a fence in an upstage area, but the sound fills the Vaults.  The choreography from William Walton avoids 1960s clichés and exudes an invigorating energy.  The music, the performers, the message, are all irresistible.  The show’s social conscience has resonances with today’s messed-up world just as much as in the 60s.  But beyond all that, it’s an exuberant celebration of life.

Let the sunshine in!  Peace, love and understanding, man.  Etc. 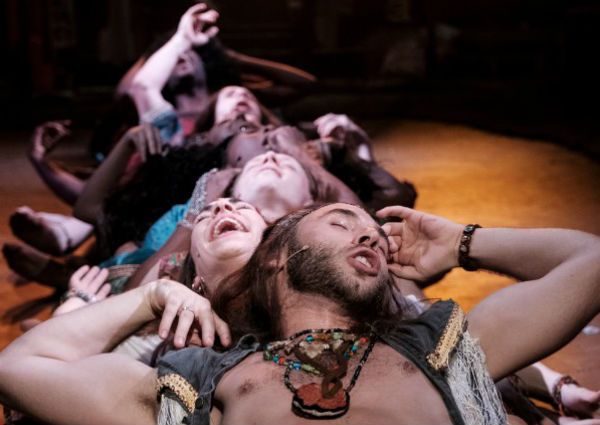 What a whopper: Andy Coxon’s Berger leads a love-in