A young girl from a poor family is sold by her mother to an itinerant circus strongman.  He is a brute who beats his new assistant until, gradually, her own talents emerge.  Together they join a circus but rivalry with another performer leads to tragedy…

That’s the plot in a nutshell.  Based on the Oscar-winning Fellini film, this touring production is a slick and stylised slice of storytelling.  It begins in a style reminiscent of ancient Greek theatre, with a chorus and a lone actor working in unison but as the story unfolds the show develops into a piece that could have come from Emma Rice’s back catalogue.  The performance style screams ‘Kneehigh’, with its onstage musicians underscoring the action, the movement sequences and the mythic quality of the narrative.  This is not a bad thing, being a Kneehigh tribute act – the plot and performers are engaging and the original music (by Benji Bower) infuses the whole affair with melancholy as well as Italian colour.

Audrey Brisson is excellent as the young Gelsomina, a deadpan little thing, Chaplinesque in her portrayal.  Stuart Goodwin’s bluff and brutish Zampano, a man led by his appetites, is an imposing figure but human rather than monstrous.  Bart Soroczynski amazes as the Fool, playing a mean accordion while riding a unicycle.

The whole ensemble switches from symbolic action to direct characterisations so seamlessly you don’t see the changes of costume happen – director Sally Cookson keeps us tightly focussed on the main action and makes the most of clever ideas with which to tell the story: a spot of rain is cleverly depicted, and slow-motion action highlights key moments.  It’s a romanticised, nostalgic view of life on the road and poverty yet at its heart is the humanity of the characters.

The entire piece is beautifully theatrical, bittersweet and touching, an intricate music box that fascinates and delights. 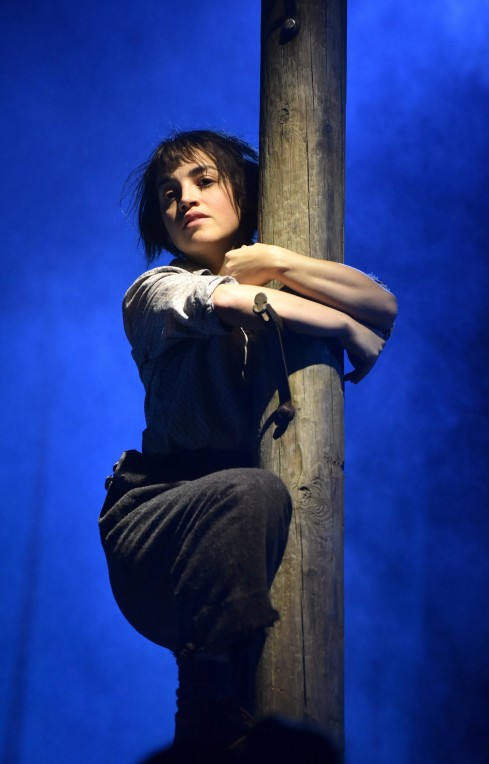