This year’s family fun for the festive season at the Crescent is David Wood’s adaptation of Roald Dahl’s well-loved story, Fantastic Mr Fox – which makes for a fun bedtime read but is a bit thin when it comes to material for the stage.  In a nutshell: the eponymous Mr Fox provides for his family by stealing from three local farmers and businessmen, who take objection to the thieving and take direct action to destroy the fox, his family, and their habitat.  Mr Fox proves how fantastic he is by tunnelling away, leading his family and other woodland critters, to a network of tunnels right underneath the shops and stores of the farmers.  They need never show their furry faces above ground again.

This story of good and evil has a lot in common with Robin Hood – the fantastic Mr F uses his cunning to ensure survival.  And there are themes of destruction of the environment in the pursuit of misguided capitalistic concerns (badger cull, anyone?) and the exploitation of some animals at the expense of others.  Killing foxes is bad, says the play, and I’m predisposed to agree.  Man is the enemy of nature.

As the three baddies, Boggis, Bunce and Bean, Joshua Norris, Sophie Hamilton-Foad and Sam Malley, striding around on stilts so they tower over the animal cast, are clearly enjoying themselves, although of the three (and the entire cast) Malley demonstrates most commitment to larger-than-life characterisation.  Others show flashes of Malley’s energy but need to be more focussed in their delivery.  Marvellous Michael Jenkins makes what he can of the one-dimensional title role, moving with grace and control, and urgency when the need arises.  Jade Marshall sings well as Mrs Fox and there is some likable support (and narration) from Bob Martin’s Mr Badger.

Jennet Marshall’s are colourful, anthropomorphising the animals with half-masks, bushy tails and human garments.  The set is little more than painted flats, advertising fried chicken and cider, so we look to the action to give us atmosphere and mood.  Moments of comic business, such as hitting each other in the face with shovels, need sharpening up and brief intervals of the cast scurrying around to jolly music need focussing if we are to appreciate them fully.

I question the American accents – director Barry Dudley has them all speak with Southern drawls for no apparent reason.  Keeping the characters English might have, however subliminally, enabled the audience to make connections with what’s going on in the country today. 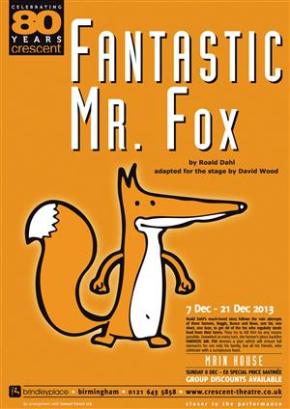